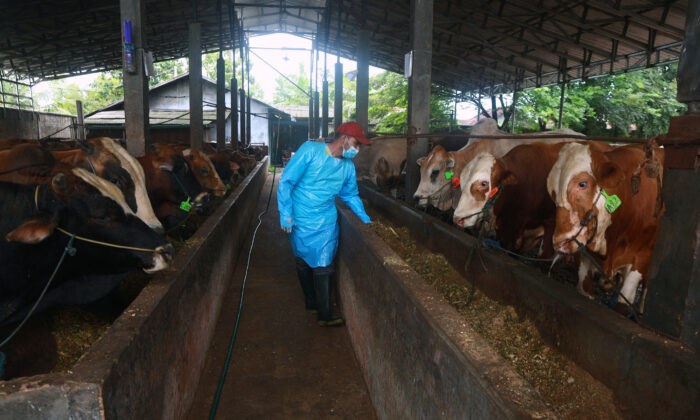 The Australian government will give financial support for foot and mouth disease (FMD) vaccinations in Indonesia to prevent the disease from spreading to Australia and wreaking havoc on the agriculture sector.

Following a formal request for assistance from the Indonesian government after FMD spread to Bali, the Australian government has agreed to contribute $1.5 million (US$1.01 million) to provide a least a million vaccine doses to the Southeast Asian country.

Earlier on July 13, Agriculture Minister Murray Watt flew to Indonesia and had a discussion about support with his Indonesian counterpart in Jakarta a day later.

He said Australia offered to share expertise on emergency disease management and biosecurity under a “two-pronged” approach that also involved enhancing biosecurity measures at the Australian border.

“Safeguarding the biosecurity of our region is a shared concern for Australia and Indonesia—this was something confirmed during the recent Indonesia-Australia annual leaders’ meeting,” she said.

FMD broke out in Indonesia in May for the first time after 36 years, raising the alarm for Australian agriculture.

On July 5, Indonesian authorities confirmed that the highly contagious disease appeared in livestock in Bali, a popular holiday destination receiving over 100 flights from Australia every week.

After receiving the news, Australian authorities immediately tightened biosecurity and adopted a number of prevention measures.

Currently, Australian authorities advise travellers arriving from Indonesia to ensure their clothes and shoes are not contaminated with soil or manure.

However, the National Party of Australia has called on the federal government to take one step further and implement compulsory shoe decontamination and a two-day ban from returning to regional Australia for all travellers coming back from Bali.

“I am strongly urging the government to introduce compulsory shoe decontamination on all travellers coming back from Bali – a move it has seemingly rejected,” National MP Kevin Hogan said.

“I have also asked them to consider that all travellers returning from Bali spend two days in the city before returning to the regions.”

Hogan also said that if FMD broke out in Australia, there would be a ban on red meat exports that could last for years and cause great damage to the country’s livestock and meat processing industries.