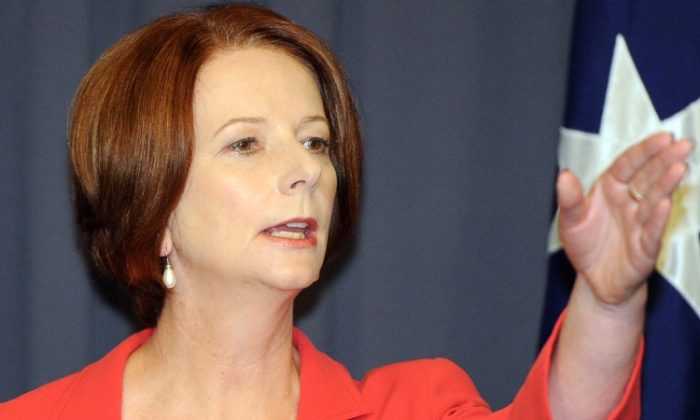 Australian Prime Minister Julia Gillard during a press conference following her victory in the Labor leadership challenge at Parliament House in Canberra, on Feb. 27, 2012. (Torsten Blackwood/AFP/Getty Images)
US

The Australian Federal Government is attempting to gain more benefit from the country’s resource boom by enacting a controversial tax on mining profits.

Mining companies such as Fortescue Metals have threatened legal action against the move, which will impose a 30 per cent tax on the profits of coal and iron ore miners once they exceed AU$75 million in profits a year.

The opposition has also vowed to repeal the tax if it is elected.

“Australians know how important the mining industry is, but they also know that we can only dig up and sell the resources once,” said Australian Prime Minister Julia Gillard in a statement.

“The Minerals Resource Rent Tax will deliver Australians with a fair return on the resources they own 100 percent.”

The tax is expected to raise AU$11 billion within three years from when it starts in July, which will bring the budget back into surplus and pave the way for tax cuts to around 800,000 small businesses.

But the conservative opposition and mining groups claim it will reduce Australia’s ability to compete with other countries for international investment.

Stiffer mining taxes have been a hot topic since first announced by former Prime Minister Kevin Rudd in 2010. His planned Resource Super Profits Tax drew a backlash from the powerful mining industry involving a multi-million dollar advertising campaign that contributed to him being ousted by his own party.