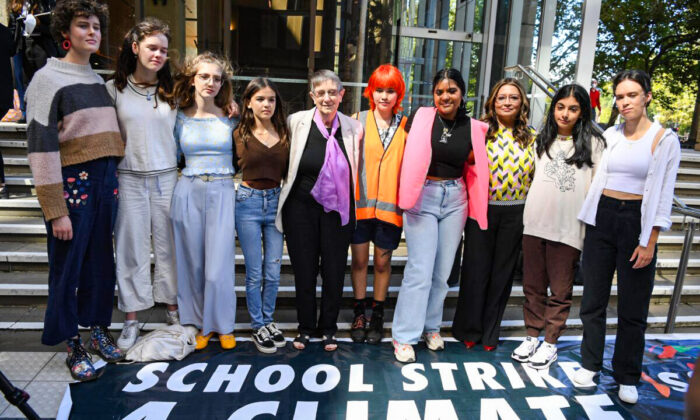 Eight high school students and their 87-year-old litigation representative, Sister Brigid Arthur stand outside the NSW Federal Court in Sydney, Australia, on March 15, 2022. The Federal Court full bench is set to rule on a finding that the Australian government has a duty of care to protect children against climate change. (AAP Image/Dean Lewins)
Australia

Australian Government Does Not Have Legal Duty of Care on Climate Risk, Says Federal Court

The Australian government has no legal obligation to protect individuals from supposed harm from risks from climate change, the Federal Court of Australia has ruled.

On March 15, the full bench of the court overturned an earlier decision that recognised that Environment Minister Sussan Ley had to consider the potential harm from climate change when deciding whether to hand out mining leases.

The action was originally brought by eight high school students seeking to block the expansion of a major coal mine—Whitehaven Coal’s Vickery Extension Project near Gunnedah in the state of New South Wales (NSW).

At the time, Justice Mordecai Bromberg allowed the expansion to go ahead but ruled that the minister had a “duty of reasonable care” not to cause injury to children when exercising her decision-making powers. Such a decision had major ramifications and meant the minister would need to constantly consider whether future decisions could contribute to climate change.

However, Justices James Allsop, Michael Wheelahan, and Jonathan Beach found otherwise, stating that such a duty was a matter for the Parliament, and not the courts to determine, while also finding that a duty of care was inconsistent with the Environmental Protection and Biodiversity Act.

Allsop said the minister only had minimal control over any potential harm from climate change and not enough to construe a “duty of care.”

“It can be accepted that the minister had, almost exclusive, control over any risk created by the approval of the extension of the mine,” he said in his judgement. “But bearing in mind the nature of the harm as [a] worldwide global climate catastrophe—the control of the minister of the harm is simply not present.”

He also noted that the concept of control was directly related to the harm that could be caused not over a “tiny increase in the risk” of rising temperatures.

Additionally, both Beach and Wheelahan were not persuaded that approving the extension of a coal mine would cause injury to the students.

Speaking outside the court in Sydney, the students behind the case said they would continue fighting.

“The federal court today may have accepted the minister’s legal arguments over ours, but that does not change the minister’s moral obligation to take action on climate change and to protect young people,” Anjali Sharma, a 17-year-old student, told reporters.

“It does not change the science,” she said. “It does not put out the fires or drain the floodwaters.”

The students’ lawyer, David Barnden, said the “science has not changed.”

“Irrespective of today’s decision, adults should do all they can to create a safe future for our children,” he said in a statement.

The latest decision is part of a growing body of law involving legal action around climate change.

In May 2021, a court in The Hague ordered oil giant Royal Dutch Shell to cut emissions by 45 percent by 2030. The court interpreted an “unwritten standard of care” under Dutch law for companies to mitigate human rights impacts arising from rising emissions.

Yet debate still exists over the veracity—and interpretation—of the science and modelling that underpins policy around addressing climate change.

For example, while Australia’s Great Barrier Reef has been the source of considerable consternation from scientists and political leaders—academics from the Norwegian University of Science and Technology found that research on ocean acidification of the Reef—which is believed to weaken the growth of coral—could be subject to bias.

The study found researchers tended to selectively publish “impressive results in prestigious journals” which could result in a “proliferation of studies reporting strong effects, even though they may not be true and can fuel citation bias.”

Michael Shellenberger, the founder of the non-profit Environmental Progress, said that despite a change in average temperatures, the overall picture was positive and should not be portrayed in a negative light.

“On so many other environmental metrics, things are going in the right direction,” Shellenberger said in an interview with EpochTV’s Jan Jekielek on American Thought Leaders.

“The chance of dying from an extreme weather event has declined over 99 percent for the average human being,” he said. “Deaths from natural disasters overall are 90 percent down, we produce 25 percent more food than we need. There’s no estimate of running out of food … Sea level rise is something that we’ve done a very good job adapting to and we’ll continue to do a good job adapting to.”