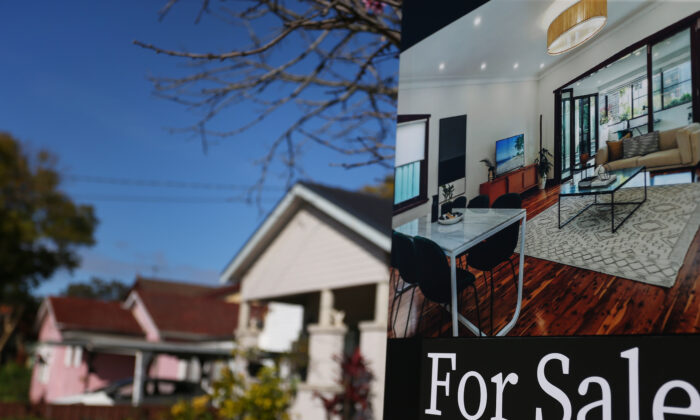 A real estate sign is seen at a property in Croydon Park in Sydney, Australia, on Sept. 6, 2022. (Lisa Maree Williams/Getty Images)
Australia

Regional Australians having difficulty getting into the housing market may be able to access a new federal government grant from October 1.

In July, the Labor government introduced the Regional First Home Buyer Guarantee (RFHBG) scheme as an expansion of the Home Guarantee Scheme in an effort to boost home ownership in the country.

The scheme was initially scheduled to come into effect in January 2023. However, Prime Minister Anthony Albanese said the government would start it three months earlier.

How Does the Scheme Work

Under the scheme, the federal government will provide a guarantee of up to 15 percent for regional first-home buyers so that people with only a five percent deposit do not have to pay mortgage insurance when purchasing a home.

Those who want to apply for the scheme must be Australian citizens who are going to buy a property outside a capital city and have been living in the region where the property is located for at least 12 months.

In addition, they have to ensure that their income and the price of the property do not exceed the caps of the first-home guarantee scheme administered by the National Housing Finance and Investment Corporation.

The RFHBG scheme will provide help to 10,000 Australians living in regional areas each year and is expected to cost taxpayers $12.1 million (US$8.27 million) at the end of the 2024-2025 financial year.

“This is part of our ambitious housing agenda to support more people to purchase their own home, as well as investing in social and affordable housing,” Albanese said.

Meanwhile, Housing Minister Julie Collins said some of the most significant drops in housing affordability had impacted regional Australians, making it difficult for them to come up with a sufficient deposit.

The news came after regional housing markets across Australia saw a steeper drop in August compared to previous months, with housing values falling by 1.5 percent.

The most significant falls occurred in commutable areas booming during the COVID-19 pandemic, such as Southern Highlands-Shoalhaven in New South Wales and the Sunshine Coast in Queensland.

While housing markets in regional areas still performed better than their urban counterparts, they were subject to the industry’s downward trend, which experts predicted to continue into 2023.