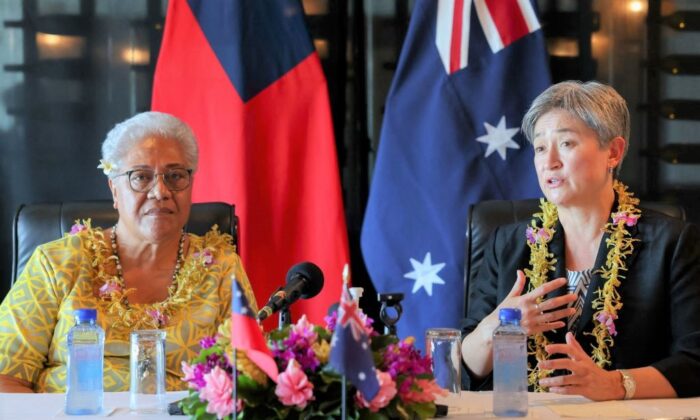 This will be the third trip to the Pacific region by Wong who will also visit New Zealand, following earlier visits to Fiji, as well as Samoa and Tonga.

“We are committed to deepening our cooperation with Solomon Islands, as we work together to face shared challenges and achieve our shared goals, including on climate change,” Wong said in a statement.

“I look forward to discussing the ways we can continue to make progress on pandemic recovery, economic development and labour mobility priorities, and addressing our shared security interests.”

Wong’s meeting with Prime Minister Sogavare will be a departure from the approach of the previous Coalition government, with former Foreign Minister Marise Payne deliberately avoiding high-level talks with Sogavare on advice from foreign affairs officials.

The Labor government has, since winning office, embarked on person-to-person meetings with the leaders of the Quadrilateral Security Dialogue, neighbouring Indonesia, and the Pacific—in an attempt to leave its own mark on foreign relations.

More ambitious climate change initiatives have also been a key point of difference from the last government, which Prime Minister Anthony Albanese and Wong have honed in on—currently half a billion dollars of climate funding has been promised to the Pacific nations.

Yet experts have been reluctant to embrace this approach with former professor of political communication Eric Louw, an expert in affirmative action, warning that corrupt leaders would simply exploit Western sentiments around climate change—and guilt around colonialism—to obtain funding.

Corruption is an overt problem in many Pacific nations.

“Sogavare believes he can cash in on the emergence of global competition between the United States and China,” he wrote in The Epoch Times.

While former Australian special forces officer Heston Russell said little could be achieved appealing directly to the leaders of the Pacific nations, instead, he said democratic leaders should focus on grassroots engagement.

“There’s a separation between the political level and local population. Most of the population are too busy surviving and going about their everyday lives and are not actively engaged in politics or what’s going on,” he previously told The Epoch Times.

“That allows the political elite to exploit the country, be influenced, be corrupted, and that plays right into the hands of countries with big resources, big regions, big power bases like the Chinese.”

Russell, who previously worked in the Pacific, said democratic nations could work in tandem, with the United States providing an overarching “strategic, financial, and diplomatic” framework to tackle Beijing in the Pacific, with Australia and New Zealand providing the “actual boots on the ground” to assist with human connections, sport, building schools, assisting with infrastructure, and helping with disaster relief.

In March, suspicions around Beijing’s long-term ambitions in the Pacific crystallised with the emergence of a security deal signed with the Solomons prime minister that would allow the Chinese Communist Party to station troops, weapons, and naval ships in the region—just 1,700 kilometres from Australia’s northern city of Cairns.

A situation seemingly more likely to eventuate with Chinese leader Xi Jinping’s recent signing of “trial outlines” that will allow the communist regime’s military to be stationed in other countries for “military operations outside of war.”