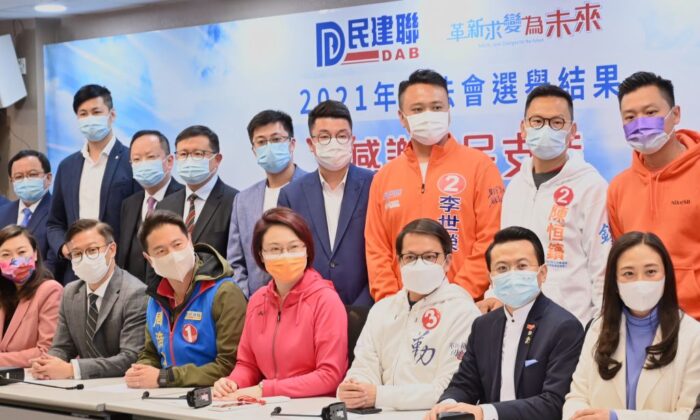 Starry Lee (bottom-C), chairwoman for the pro-Beijing Democratic Alliance for the Betterment and Progress of Hong Kong (DAB), speaks at a press conference with party members in Hong Kong on Dec. 20, 2021 as Pro-Beijing candidates swept to victory in a "patriots only legislature vote that saw record low turnout from voters and government loyalists sweep every seat. (Peter Parks/AFP via Getty Images)
Australia

“Since handover, candidates with diverse political views have contested elections in Hong Kong. Yesterday’s election has reversed this trend,” according to a joint statement from the five foreign ministers and leaders.

“The overhaul of Hong Kong’s electoral system introduced earlier this year reduced the number of directly elected seats and established a new vetting process to severely restrict the choice of candidates on the ballot paper,” he added.

“These changes eliminated any meaningful political opposition. Meanwhile, many of the city’s opposition politicians—most notably the majority of the ‘NSL 47’—remain in prison pending trial, with others in exile overseas.”

The Hong Kong poll was run after a major overhaul of the electoral system, which meant only candidates recognised as “patriots” by the Chinese Communist Party (CCP) were allowed to run—effectively ruling out pro-democracy candidates.

The number of candidates that the public could elect was also reduced from 35 to 20, despite the Legislative Council being expanded from 70 to 90 seats.

In response, voter turnout was the lowest historically, with turnout being only 30.2 percent, or around 1,350,680 people, compared to the 50 percent turnout in 2012.

“Actions that undermine Hong Kong’s rights, freedoms and a high degree of autonomy are threatening our shared wish to see Hong Kong succeed,” the leaders said.

They warned of a “wider chilling effect” of the National Security Law, a contentious law passed last year that punishes any act defined as secession or subversion of the state—a broad interpretation of the law would catch dissidents and democracy activists.

“NGOs, trade unions and human rights organisations not supportive of the government’s agenda have been forced to disband or leave, while media freedoms are being curtailed at pace,” the Five Eyes’ said.

In response, Sen. James Risch (R-Idaho), ranking member of the U.S. Senate Foreign Relations Committee, wrote on Twitter, “With only 30.2 percent of registered voters casting ballots in Sunday’s elections, it’s obvious #HongKongers refuse to participate in sham elections orchestrated by the #CCP. Elections, where the candidates are pre-chosen by #Beijing, do not equal #democracy.”

While Australian Shadow Foreign Affairs Spokesperson Penny Wong said the opposition was “deeply disappointed and concerned” by the election result.

“Unfortunately, the Legislative Council elections overnight are yet another illustration of the continuing erosion of Hong Kong’s autonomy and democratic freedoms, as guaranteed in the Basic Law and the Sino-British Joint Declaration, to which China had committed,” she said in a statement.

“This further undermining of Hong Kong’s democracy and the One Country, Two Systems arrangement is not the behaviour of a responsible global power.”