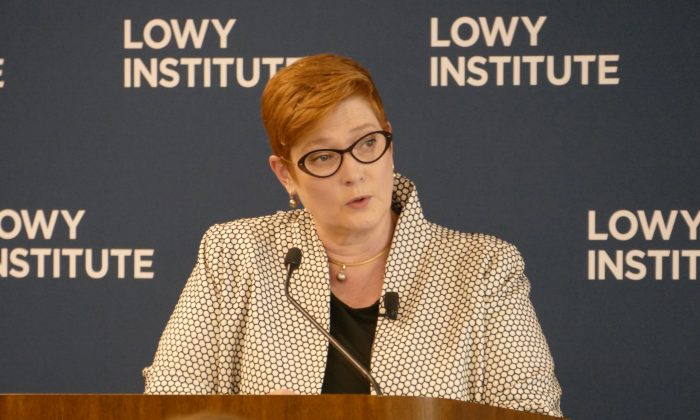 Australia’s foreign affairs minister Marise Payne has finally expressed concerns to local media over the recent detention of two Canadian citizens in China. The remarks from Payne were first published by the Australian Broadcasting Corporation late Dec. 30 but only after a group of 30 scholars, foreign policy experts, and former diplomats petitioned for Payne to do so earlier that day.

In her statement, Payne said that Canberra supported Canada’s justice system and said has communicated its concerns over the arrests to Beijing.

“Australia and Canada share a strong commitment to the rule of law, essential to the functioning of our democratic systems. I have every confidence in the fairness and independence of Canada’s administration of justice,” the statement read.

“The Australian Government is concerned about the recent detention of two Canadian citizens in China.

“We would be very concerned if these cases were related to legal proceedings currently underway in Canada involving a Chinese citizen, Ms Meng Wanzhou.

“The Australian Government has conveyed this position to Chinese counterparts and we have been in regular contact with Canadian officials.”

The statement stopped short of joining Canada in calling on Beijing to immediately release the two detained Canadians, as requested by the petition.

And now Sen. Payne responds – but her statement falls short of what the scholars' petition asks for:https://t.co/f4TWeUPH9u

Earlier on Dec. 17, Payne had told The Australian that she was declining to comment on the arrests.

‘The Same Thing Could Happen to Australians’

Huawei Chief Financial Officer Meng Wanzhou was arrested in Vancouver, Canada, on Dec. 1 at the request of the United States, for allegedly being involved in a scheme to use the global banking system to evade U.S. sanctions against Iran.

Since then, Chinese authorities have detained former Canadian diplomat and think-tank researcher Michael Kovrig and entrepreneur Michael Spavor. The two were charged with posing a risk to Chinese national security. Chinese state media outlets reported that both men were detained Dec. 10. A day prior to the arrests, China warned Canada of “grave consequences” if Meng was not released immediately.

More than a week later on Dec. 21, Canada called for China to release the pair immediately.

The petition from prominent Australian China observers to Payne noted how the European Union, United States, United Kingdom, Germany, and France had all joined Canada in issuing statements to express concern “regarding the apparently political motivation” for the arrests, “which raise serious concerns about legitimate research and business practices in China.”

What is striking about the list of 30+ academics who have signed this letter to @MarisePayne on China’s hostage taking is that this is generally NOT a list of security types – it includes deep experts on China who have forged their careers supporting engagement with China https://t.co/a81vW13htk

“In view of the risks this raises to Australian research and business activities that form the bedrock of positive Australia-China relations, we respectfully ask you to join the above-mentioned governments in supporting the Canadian government’s call for the immediate release of these two detainees,” the petition to Payne reads.

“Some Australians might think that this is not our problem, but the same thing could happen to Australians in China if bilateral relations deteriorated,” McGregor said, according to The Australian.

“We should support Canada out of principle but also self-interest, because we might need their support one day as well.”

ANU visiting fellow Adam Ni, who also signed the petition, travels to China regularly. He told The Australian Broadcasting Corporation: “I think the Australian government should really look at our national interest to ensure that when something like this happens to Australian nationals, then like-minded countries would likewise support our protests against the Chinese Government.

“Researchers like me, we travel to China frequently in order to do research.

“Under other circumstances, if there was trouble in Australian-China relations, then it is people like me … that might be harassed by the Chinese Government or potentially even detained.”