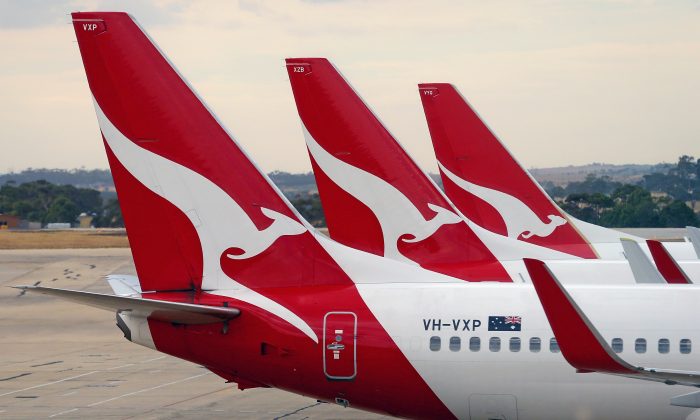 Qantas plans to test a 19-hour flight with employees only on board to ensure the flights are safe and comfortable enough for customers. (Scott Barbour/Getty Images)
Australia

Australian Farmers Cheesed Off at Qantas Use of Foreign Produce

Farmers have criticised Qantas for serving foreign-sourced cheese and crackers aboard its flights.

However, the Flying Kangaroo has hit right back, saying the claim is misinformed.

“The cheese isn’t from an Australian dairy farm, the crackers aren’t made of Australian wheat, and we would really like to see them backing Australian families,”Arkle told AAP.

He said it was disappointing to see foreign produce offered when NSW growers were great supporters of the airline.

“The Qantas brand promise is so intimately tied to the Australian identity, we think it would be the right thing for Qantas to support Australian grain produce where that’s possible,” Arkle said.

However, the airline, which has been under fire recently from passengers enduring delays and cancelled flights, has hit back.

A Qantas spokesperson told AAP the airline was one of the biggest private-sector supporters of Australian farmers in the country, using products and services from more than 13,000 small local suppliers.

“The overwhelming majority of food and wine that we serve on board our aircraft and in our lounges comes from Australian farms and producers,” the spokesperson said.

The airline said that as well as being the third-largest buyer of Australian wine, it served passengers NSW-grown beef and cheese from the Bega.

“Unfortunately, there are no Australian producers that offer a combined cheese and cracker product, which is why we source these from New Zealand,” the spokesperson said.

Qantas has invited NSW Farmers to run the group through the “vast list of local farmers and producers” it supports.

However, an NSW Farmers spokesperson doubled down on the criticism.

He said a quick search of a major supermarket’s online catalogue revealed at least two major food businesses that produce a cheese-and-crackers product made from almost all Australian ingredients.

“Obviously, this is a quick desktop search, not an exhaustive market study, but the clear message here is that you can find an all-Australian alternative quite easily if you are motivated to,” he said.

NSW Farmers said with recent price hikes in Australian-grown produce since COVID, there had been a trend among supermarkets and other food suppliers to source their products internationally.

“We’d like to see Aussie retailers backing up farmers where they can.”