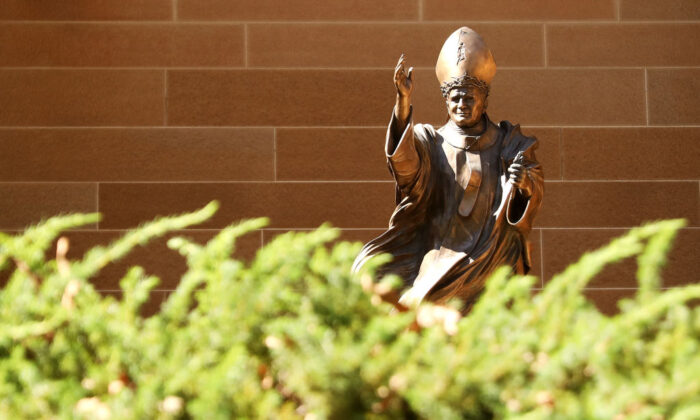 A statue is seen outside the closed St Mary's Cathedral on April 12, 2020 in Sydney, Australia. (Mark Kolbe/Getty Images)
Australia

The revamped religious discrimination bill will allow schools to hire people on the basis of faith but will not shield employees from prosecution for making statements of belief that might offend others, Education Minister Alan Tudge said.

The bill would also not allow a school to reject a teacher based on their sexuality or other traits, and would not protect healthcare providers’ conscientious objection to providing treatment on religious grounds.

“If a school has a set of religious values which they are imparting, then they should be able to employ teachers who have values consistent with those articulated principles,” Tudge told Sky News on Wednesday.

Tudge added the religious bill would override existing state and territory laws “where necessary,” but will not go so far as to allow a Catholic school to reject a gay teacher.

“That wouldn’t be lawful under our bill,” Tudge said.

The bill, introduced to parliament on Wednesday, was an election promise by the Liberal-National coalition but has sat in the too-hard basket since then as conservatives and moderates disagree on how far it should go.

Although the government has yet to release the proposed legislation in full, it has allegedly briefed backbenchers that it would scuttle the contentious “Folau clause,” which would require medium to large businesses to prove financial damage in order to sack someone for making a religious statement.

Folau, who has refused to apologise for his belief, later received an apology from the body and a confidential settlement.

But the Bill has also attracted criticism from conservative politicians with NSW One Nation leader Mark Latham saying it was a “weak version” of the original proposed legislation.

“It’s a rather a defensive form of religious freedom rather than the positive form,” NSW One Nation leader Mark Latham said. “This is pretty disappointing for the Morrison government, it’s a real back down.”

While conservatives and faith-based groups expressed their frustration at the Morrison government watering down the bill, some are raising concerns that legislating religious freedom may end up narrowing it.

“As soon as you seek to codify what freedoms are available to people of religion you then run the risk, I guess, of having them weaponised, used against them,” Australian conservative political commentator told Sky News host Paul Murray.

“You’re also limiting freedoms which I think in some respects, because they’re codified, may actually have an adverse effect.”

The bill has also suffered criticism from LGBTIQ+ advocate groups like Equality Australia which believe the religious freedom protections amount to support for “hate” speech and prejudice.

“In fact, the Morrison government’s bill licences more discrimination against all our communities, by overriding existing protections for women, people with disability, LGBTIQ+ people and even people of faith,” said Equality Australia Chief Executive Anna Brown.

While conservative academic and the Director of the Centre for Independent Studies, Peter Kurti, said the intolerance shown by those determined to silence people of faith who voiced their beliefs in public demonstrated the necessity of having such a law.

“For example, few would be surprised if an environmentalist group chose not to employ a confessed advocate of coal or other fossil fuels. Yet arms are thrown up in horror when a religious school asks its staff to be sympathetic to the creeds of the faith in question,” Centre for Independent Studies Director Peter Kurti wrote in a commentary for The Epoch Times.

“Accentuation of difference… makes it harder for citizens of a secular, multicultural society to dissent from the new orthodoxies about gender, human sexuality, and the family.”

“Instead, dissent is weaponised and deployed as a form of alleged “harm” to shut down debate,” he said.