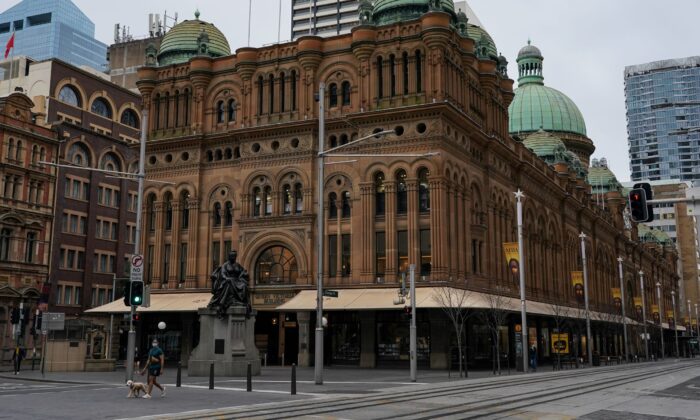 A masked man walks a dog through the quiet city centre during a lockdown to curb the spread of a coronavirus disease outbreak in Sydney, Australia on Aug. 23, 2021. (Loren Elliott/Reuters)
Economy

SYDNEY—Australian employment dived in August as coronavirus lockdowns in Sydney and Melbourne forced businesses to lay off workers and slash hours, while the jobless rate was nudged lower by a sharp fall in the number of people looking for work.

Thursday’s data from the Australian Bureau of Statistics (ABS) showed employment fell by 146,000 in August, compared to median forecasts of a drop of 90,000.

The unemployment rate dipped to 4.5 percent, having already fallen to 4.6 percent in July when lockdowns also distorted the data.

The ABS cautioned that the dip in the jobless rate was due to people dropping out of the labour force given how difficult it was to look for work while in lockdown. Only people actively looking for work are counted as unemployed.

“The fall in the unemployment rate reflects a large fall in participation during the recent lockdowns, rather than a strengthening in labour market conditions,” said Bjorn Jarvis, head of labour statistics at the ABS.

“Hours worked data continues to provide the best indicator of the extent of labour market impacts and recovery from lockdowns,” he added.

Hours worked in August slid 3.7 percent nationally, and by 6.5 percent in New South Wales where Sydney was closed for the entire month.

Likewise, the participation rate fell a steep 0.8 percentage points to 65.2 percent, while underemployment jumped a full point to 9.3 percent as workers’ hours were restricted.

“The September print for labour force will see a further significant step down, as this will include the full impact of Victoria’s lockdown,” said Sarah Hunter, chief Australia economist for BIS Oxford Economics.

“The degree of dislocation in economic activity means that GDP is likely to fall by around 4 percent in the September quarter.”

The Reserve Bank of Australia (RBA) has cautioned that the unemployment rate will likely rise well above 5 percent once the full impact is felt, though it is also optimistic the economy will recover quickly once lockdowns ease.

A sharp increase in vaccinations has allowed the New South Wales government to flag a loosening of restrictions by mid-October, with Victoria likely to follow.