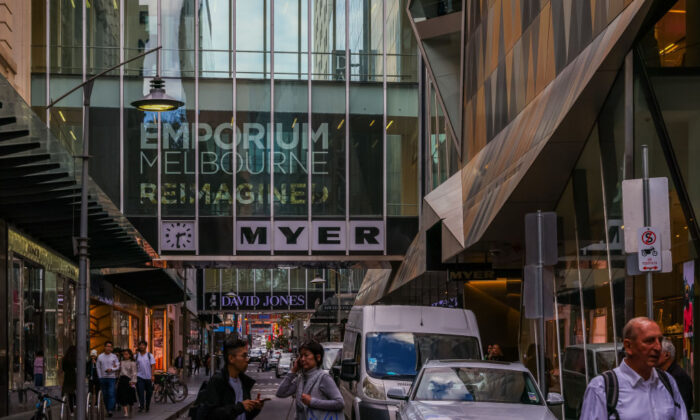 A general view of shoppers near Bourke Street Mall in Melbourne, Australia, on May 3, 2022. (Asanka Ratnayake/Getty Images)
Australia

The Australian economy recorded marginal growth in the first quarter of 2022, even though the country suffered from the impacts of the flood crisis and the COVID-19 Omicron variant.

According to the March quarter national accounts, the economy expanded by 0.8 percent, a far cry from the revised 3.6 percent growth in the December quarter. As a result, the annual growth rate was brought down to 3.3 percent from 4.4 percent previously.

“In summary of the national accounts, robust in parts, resilient in parts, but much weaker than what our predecessors were counting on in their budget forecasts,” Treasurer Chalmers told reporters in Canberra on June 1.

“These national accounts are a glimpse of the mess that the former government left behind for us to clean up.”

Nevertheless, household spending helped propel the economy forward, allowing it to overcome the aftermath of COVID-19 and the flood crisis.

In addition, the Australian Bureau of Statistics said that government spending was another main contributor to the economic growth in the first three months.

However, the most significant rise in imports since December 2009 witnessed in the March quarter dampened the growth prospect. The latest data showed that imports of goods and services soared 8.1 percent during the period, taking away 1.5 percentage points from GDP growth.

HSBC chief economist Paul Bloxham anticipated that growth would improve in the June quarter due to the subsidence of some of the disruptions that occurred in the March quarter.

“However, we expect growth to slow in the second half of the year, as real household disposable incomes are squeezed, interest rates rise, and housing prices fall,” he said.

“These are mounting headwinds for the consumer.”

A score above 50 indicates expansion in manufacturing activity, while a number below 50 indicates contraction.

“There are mixed messages about the immediate outlook, with new orders continuing to rise but with many manufacturers expressing concern about the prospects of sharp energy price rises in the months ahead,” Australian Industry Group chief executive Innes Willox said.

“Manufacturers continue to report supply constraints and labour shortages as the leading sources of concern, and they reported still higher input costs and a lift in wages growth in May.”