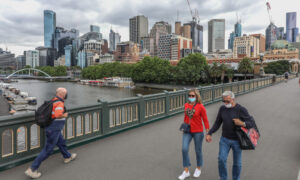 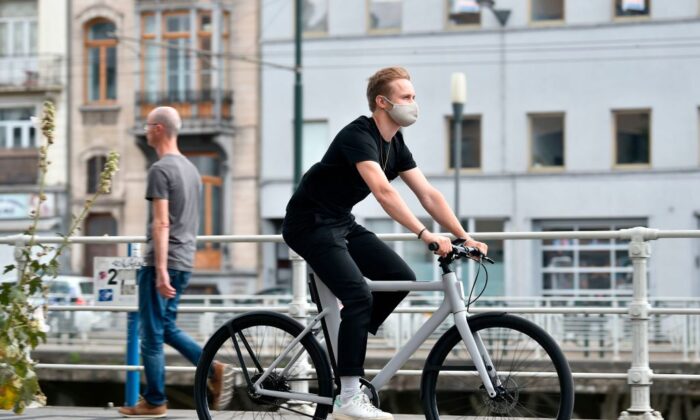 A Cowboy's employee, wearing a protective face mask, rides a Cowboy electric bike in the streets of Brussels, on July 28, 2020. (JOHN THYS/AFP via Getty Images)
Australia

An e-bike sales spike has been attributed to pent-up demand from Australians coming out of lockdown, as purchases nearly doubled since the COVID-19 pandemic hit.

New figures from 99 Bikes, one of the nation’s largest bike retailers, show electric bike sales went up a gear from April to December last year.

Founder Matt Turner said purchases almost doubled nationally over that span and were up as much as 220 percent in some regions.

He put the rise down to people emerging from lockdowns seeking “safer, cheaper, healthier and environmentally friendly ways to get around”.

It tracks with a broader trend of riders turning to electric-powered bikes, with the company’s sales up 131 percent nationally since 2018.

Turner said the perception e-bikes were just for older people was a myth, with data suggesting 42 percent of users are aged 35-54.

“Most of our buyers are people aged 25-plus, who want to cycle to work but have been put off by concerns about their fitness, how long it will take, or just the thought of arriving hot and sweaty at the office,” he said.

“An e-bike takes away all of those factors and the research suggests that once they have an e-bike, 93 percent of people starting biking to work every day.”

“Plus I know I am doing something good for my body,” she said.

“It also means that I can make a small contribution to reducing emissions and improving the health of our planet.”

Nicole Adamson, general manager of participation at AusCycling, said a COVID silver lining was thousands had taken up riding or falling back in love with it.

“Our goal is to make Australia a nation of bike riders,” Adamson said.

“The exciting thing about e-bikes is that it gives everyone, regardless of their fitness level, the option of riding a bike.”