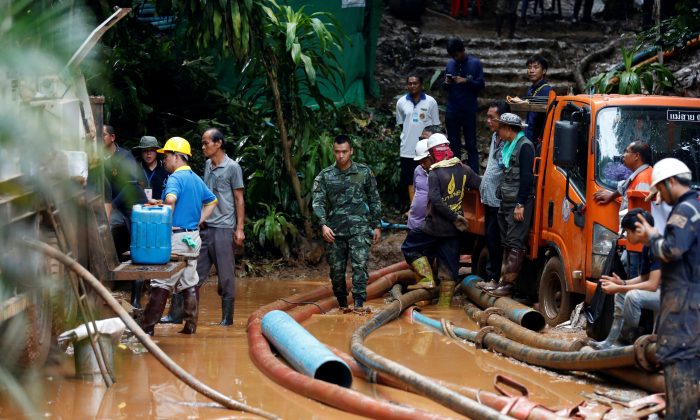 Soldiers and rescue workers near Tham Luang cave complex, as an ongoing search for members of an under-16 soccer team and their coach continues, in the northern province of Chiang Rai, Thailand, July 2, 2018. (Soe Zeya Tun/Reuters)
Australia

An Australian doctor who has been widely applauded for his involvement in the Thai cave rescue posted a heartfelt message to Facebook while on his way home, in which he emphasised the teamwork and efforts involved in the operation.

Richard Harris, an anaesthetist and experienced cave diver, helped to bring 12 young boys and their soccer coach to safety from Tham Luang cave in northern Thailand, in a complex rescue that involved more than 100 divers from multiple countries.

Harris was accompanied by diving partner, Craig Challen. The two Australians went into the cave and stayed with the boys for each of the three days of the rescue.

“We [Craig and I] want to make everyone realise that while we might have become the face of this rescue for some reason, everyone should know that the role we played was no more or less important than all the many hundreds (perhaps thousands) of people,” Harris wrote in the post.

“The part we played has been made out to be a lot more noble than it actually was, we just consider ourselves lucky to have had some skills that we could contribute to the wonderful outcome,” he wrote.

Harris credited divers who first ventured into the cave, including local divers and the “awesome foursome” from Britain, John Volanthen, Rick Stanton, Jason Mallinson, and Chris Jewell, for finding a safe passage to the children and coach.

“[They] had already been doing the most extraordinary dives through the cave and laying the very robust rope, which made all subsequent dives to the soccer team not only possible, but safe,” Harris wrote. “Following someone else’s line is very much easier than finding your own way.”

Stanton and Volanthen were able to find the trapped team alive some 800-1000m under the ground and close to 4km from the cave entrance, nine days since they went missing.

According to Harris, the four British divers did further supply dives to the soccer players, the coach and the four Thai Navy SEALs, who had stayed with the boys.

“Meanwhile on the ground, the Thais and international community sent in swarms of men and women to provide everything from catering, communications, media, and of course the huge teams of workers filling the cave with tonnes and tonnes of equipment to try and lower the water and sustain the diving operations,” Harris wrote.

“I have never seen anything like it with man battling to control the natural forces of the monsoon waters,” he added.

More than 100 divers from multiple countries were involved in the rescue operation, according to Reuters, 18 of whom were in the main team that guided the boys to safety.

A remarkable example of international cooperation. Here’s the smiling faces of the Australian contingent who, under the leadership of the Royal Thai Navy Seals, worked together with crews from China, the UK and the US to return the Wild Boars soccer team and their coach home. pic.twitter.com/mJZwe08pKy

“The pressure that was put on these guys was immense and they never dropped the ball for a second,” Harris wrote.

When the boys and coach reached a chamber some 2km from the entrance, Harris recounted how US pararescue teams, AFP SRG divers, Aussie CD, Chinese divers and Thai Navy and Military medics assessed them and moved them out of the cave to a field hospital, and later another hospital in Chang Rai centre.

Bill Griggs, who used to be Harris’s boss where Harris still works, told the ABC that Harris would be reluctant to take the spotlight.

“When you’ve been a part of a team, you really feel at little bit embarrassed, or sheepish, about [the accolades] because it is a big team effort,” Griggs said.