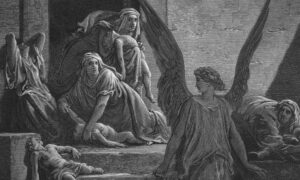 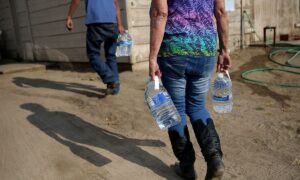 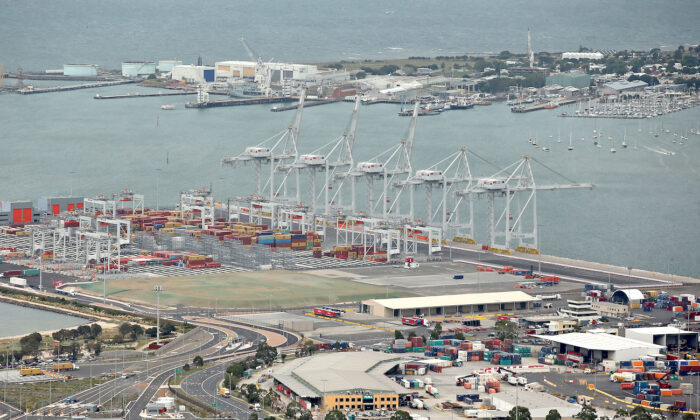 File photo of the Port of Melbourne in Melbourne, Australia on Feb. 24, 2017. (Scott Barbour/Getty Images)
WORLD

More than 60 Melbourne dockworkers have been stood down for refusing to unload a container ship carrying medical supplies from China.

The Xin Da Lian docked at the DP World terminal at the Port of Melbourne on Tuesday night after leaving Shanghai on March 17.

The Maritime Union of Australia says the vessel is in breach of the federal government’s 14-day coronavirus quarantine period after visiting a Taiwanese port on March 19.

Dockworkers say shaving two days off the quarantine period is “a risk to workers and the community.” The union’s members who refused to unload the vessel over concerns about the risk of the coronavirus were stood down.

“Any crew members aboard a vessel that has been to mainland China must have been at sea for 14 days before they are allowed to dock in Australia,” he said in a statement on Wednesday. “The union is not allowed to unilaterally declare a vessel unsafe. They are not allowed to create their own set of rules.”

The company said it is following the strict rules, including advice from the ABF on March 20 that crew on commercial vessels must wear personal protective equipment in public spaces on the ship while non-crew members are on board.

After 22 dockworkers refused and were stood down on Tuesday night, another 40 followed suit on Wednesday morning, DP World said. It’s prompted the state opposition to ask the state government to intervene to get the goods off the vessel.

“The largest cluster of COVID-19 cases in Australia … was the result of inadequate measures put in place for the arrival of ships,” he said in a statement. “What’s the difference with this ship?”

A large number of the coronavirus cases in NSW involved passengers who were on the Ruby Princess and disembarked on March 19 without adequate checks.

The union has been demanding improvements to biosecurity measures at Australian ports since January.

The Department of Home Affairs, in a statement on Wednesday afternoon, said the ship’s crew had to stay on board until their isolation period ends on Thursday.

“The period maritime crew spend at sea prior to their arrival in Australia counts towards the 14-day period of self-isolation,” the statement added. “The cargo is not subject to the same restriction.

“The cargo terminal operator, in this case DP World, is responsible for the movement of cargo on and off the vessel and the way that is undertaken.”

It said health and biosecurity arrangements for vessels are the responsibility of state health authorities and the Department of Agriculture.