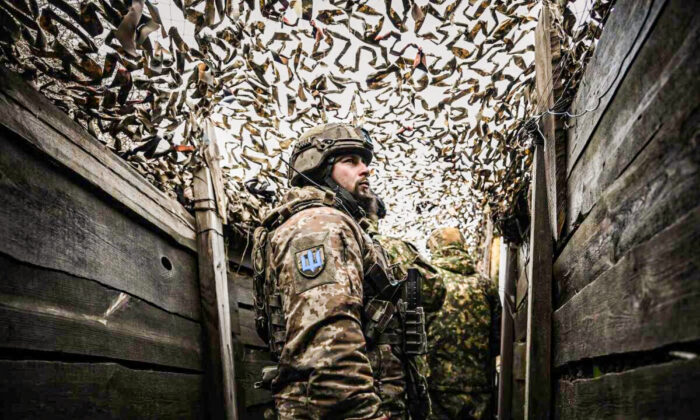 Ukrainian troops patrol at the frontline outside the town of Novoluhanske, eastern Ukraine, on Feb. 19, 2022. (Aris Messinis/AFP via Getty Images)
Australia

Australian diplomats have been ordered to evacuate Ukraine following the mobilisation of Russian forces into the two breakaway provinces of Donetsk and Luhansk.

Foreign Minister Marise Payne condemned President Vladimir Putin’s decision to deploy troops under the pretence of “peacekeeping” and said Australia was working with the United States, United Kingdom, European Union, and other governments on “swift and severe” sanctions.

“The Australian government condemns President Putin’s declaration today that the Donetsk and Luhansk regions of eastern Ukraine are independent states,” she said in a statement on Feb. 22.

“We continue to urge all Australians to leave Ukraine immediately. Do not delay. The safety of Australians and officials is our priority,” she added.

Australian embassy operations in Lviv have temporarily closed and its officials have deployed to eastern Poland and Romania to assist Australians seeking to depart Ukraine, the minister said.

“Russia should step back, it should unconditionally withdraw, back behind its own borders and stop threatening its neighbours,” he told reporters on Feb. 22.

“It’s unacceptable, it’s unprovoked, it’s unwarranted, and Russia should understand that by seeking to invade another country, that this cannot advantage them, and it would seriously and significantly cost Russia.”

On Feb. 21, Putin signed a decree recognising the independence of the separatist Donetsk and Luhansk regions in eastern Ukraine—territories internationally recognised as being under Ukrainian control.

“Ukraine most certainly considers these last Russian actions as the violation of the sovereignty and territorial integrity of our country,” he said.

“All responsibility for all the consequences connected with the decision mentioned above lies on the Russian political leadership. The recognition of independence of the occupied territories of Luhansk and Donetsk regions might mean the unilateral withdrawal of Russia from Minsk agreements.”

The head of Ukraine’s diplomatic mission to Australia, Volodymyr Shakivskyi, said the situation was deteriorating.

“We still hope that we can find a way out of this situation. As every nation, we would like to have peace and avoid a worst-case scenario,” he told ABC Radio on Feb. 22. “We believe the chances for the peaceful resolution is going down.”

“There is no military solution for Ukraine, Ukraine will only rely on political and diplomatic measures to bring those territories back.”

Australia is working with democratic allies to impose additional sanctions on Russia following President Vladimir Putin’s decision to send troops into the Ukrainian regions of Donetsk and Luhansk.

“Australia has been imposing autonomous sanctions in relation to Russia’s threats to Ukraine for many years now,” Foreign Minister Marise Payne told 2GB Radio on Feb. 22, noting that any additional sanctions would be “deep and serious” and have a real impact.