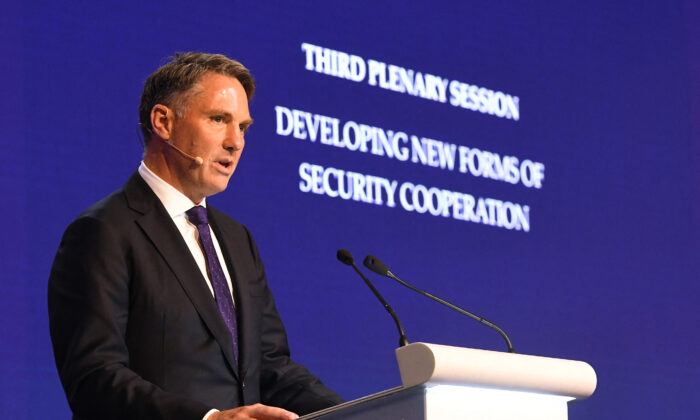 Marles said there was a long way to go before regular communication with China restarted, but noted that resumption of ministerial talks was an important first step.

The defence minister spoke with his Chinese counterpart General Wei Fenghe at a recent international forum in Singapore, the first such meeting after an almost three-year freeze.

“There was a desire in the meeting that we had, on both sides, to have the relationship put in a better place,” Marles told ABC Radio on June 14.

“The door is open to having further meetings, but I think we do need to understand that the relationship has not been in a good place at all, and this is only the first step and there’s still a long way to go.”

Relations between Beijing and Canberra have been in a deep freeze since Australia called for an investigation into the origins of COVID-19, which triggered disputes with Australia’s largest trading partner.

While the talks with China have come after a change of government in Australia, Marles said there was no change in policy.

“We want to assert our rights in places like the South China Sea, we see the importance of a global, rules-based order in the Pacific,” he said.

The deputy prime minister is currently in Japan for a three-day visit.

Marles will hold talks with his Japanese defence counterpart Nobuo Kishi and Indo-Pacific issues are expected to be on the agenda.

Marles said Australia wanted to work closely with the Solomon Islands, following talks between himself and the country’s defence minister.

“We have to be their natural partner of choice,” he said. “We understand that that’s not something we get by right, we need to do the work.”