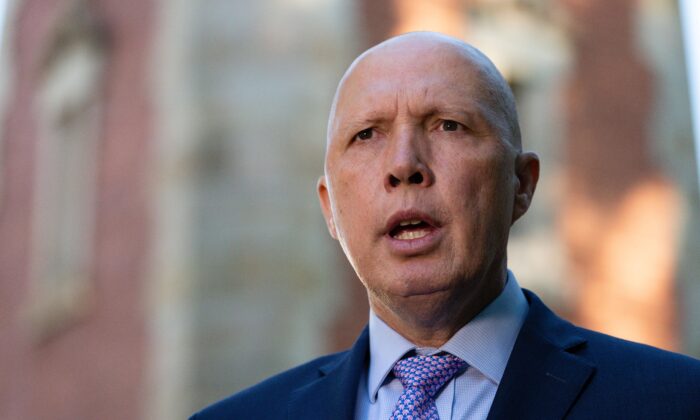 Australia’s Defence Minister Peter Dutton has said that Russian President Vladimir Putin should be investigated for war crimes allegedly by Russian forces in the Ukrainian city of Bucha after photos and videos emerged of dead bodies lying in the streets and in mass graves.

“Bucha massacre proves that Russian hatred towards Ukrainians is beyond anything Europe has seen since WWII,” Kuleba wrote on Twitter, where he posted a photo of dead civilians that were allegedly targeted by Russian forces.

He added, in a follow-up post that included more photos of dead Ukrainian civilians, that the only way to stop further similar acts was for Ukraine’s partners to send “tanks, combat aircraft, heavy air defence systems” to “help Ukraine kick Russians out as soon as possible.”

In response to the emerging information, Dutton declared Putin, a “brutal autocrat.”

“It should be investigated. Action should be taken against him because he’s a brutal autocrat, and the use of chemical weapons, the use of brutality against women and children, just doesn’t phase him,” Dutton told Seven’s Sunrise program on April 5.

“When you’re seeing theatres bombed, when you’re seeing residential areas bombed, and the potential of mass graves or executions, that is straight up, and down the act of a war criminal, this should be investigated as quickly as possible.

“The world needs to unite, become even stronger in the sanctions that we’re applying against Russia. Australia has been there from day one, supporting our allies and friends, standing united with Ukraine,” he added.

Dutton’s comments follow remarks from Australia’s Foreign Minister Marise Payne, who said that Russia would be held accountable for the alleged war crimes by Russian troops in Bucha.

“Shocked to hear of accounts of summary execution, rape, looting and other crimes by Russian troops in Bucha and across Ukraine,” Payne wrote on Twitter on April 3.

“The targeting and treatment of innocent men & women in this way is despicable. Russia must and will be held accountable for the actions of its forces.”

Shocked to hear of accounts of summary execution, rape, looting & other crimes by Russian troops in Bucha & across Ukraine. The targeting & treatment of innocent men & women in this way is despicable. Russia must & will be held accountable for the actions of its forces.

However, Russia has denied responsibility for the killings and accused Ukraine of “another provocation.”

“All photographs and video materials published by the Kyiv regime, allegedly showing some kind of ‘crimes’ by Russian military personnel in the town of Bucha … are yet another provocation,” the Russian Ministry of Defense said on April 3, according to state-run media.

“It’s particularity concerning that all the bodies of people whose images were published by the Kyiv regime, after at least four days, have not stiffened, do not have characteristic cadaveric spots, and have fresh blood in their wounds,” it added.

Instead, the ministry has accused “the Kyiv regime” of staging the dead bodies for Western media “as was the case with the [fake news from the] Mariupol maternity clinic.”

Meanwhile, Payne has travelled to Brussels for a meeting of NATO Foreign Affairs Ministers to discuss a coordinated international response to Russia’s invasion of Ukraine and other global security challenges, she said in a release on April 4.