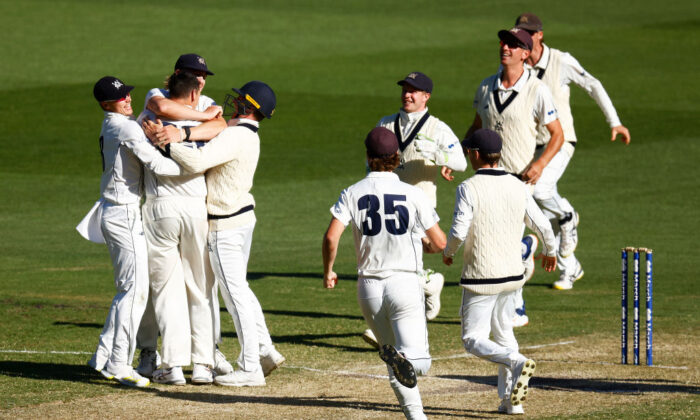 Australian cricket officials are pushing for all staff and players to be 100 percent vaccinated by the end of November. This comes as professional sporting codes across the country grapple with the issue of vaccine mandates.

Nick Hockley, CEO of Cricket Australia, said the body had to do little to increase vaccination rates with many players and staff proactively taking the jab.

“We are 100 percent fully vaccinated for both doses, male and female international players,” he said. “And then we are at 100 per cent first dose for our domestic playing group.”

“There has been a big education program. Our medical advisors have run workshop sessions for staff and players,” he said. “It’s symptomatic of the whole last 18 months. Everyone has just stepped up to do their bit.”

On Nov. 2, the last unvaccinated domestic player received their first dose of a vaccine, with the plan being the entire playing group comprising 300 players across the men’s and women’s competitions will be fully vaccinated by the end of the month.

Inoculation is critical for all sporting codes as many players will need to navigate the many restrictions Australian state governments have established in response to the pandemic.

The country’s biggest sporting competition, the Australian Football League (AFL), has taken a firm stance on vaccine mandates, announcing in October that all men’s team players and staff needed to be vaccinated by mid-February.

Women’s players are supposed to receive their first dose by Nov. 19 and second by Dec. 17.

Meanwhile, Deni Varnhagen, a registered nurse and AFLW player, has been placed on her team’s inactive list for the upcoming season for her stance against the jab.

The AFL’s primary competitor, the NRL, has ruled out a mandate but warned unvaccinated players they could face stringent protocols.

The NRL’s stance has come amid opposition from the code’s many Polynesian players, many of which are deeply religious.

Meanwhile, Rugby Australia has confirmed that all national Wallabies and Sevens players are vaccinated, but provincial-level competition players’ rates were less clear.

For the A-League soccer, around five percent of the men’s competition remain unvaccinated, while in the National Basketball League, two players had their contracts terminated after refusing the vaccine.