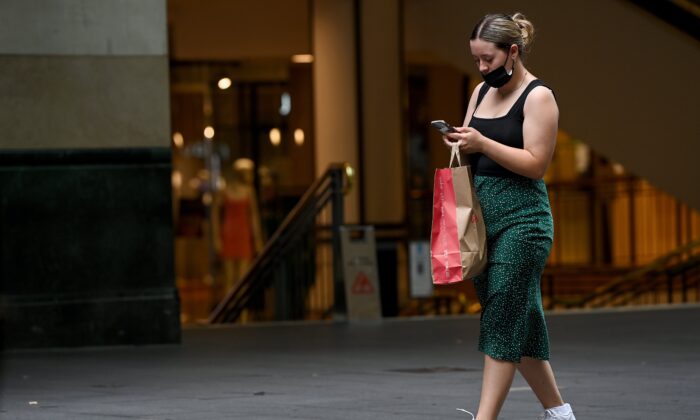 January typically posts positive consumer confidence results, but it has plummeted 8.1 points to 97.9 during the second week of the month following the emergence of Omicron. Additionally, all states fell below the neutral level of 100 points, and all confidence subindices dropped, including an 11.3 percent drop in “current financial conditions” and a 4.3 percent drop in “future financial conditions.”

Further, 19 percent of respondents are expecting to be “worse off” financially this time next year, which is the highest since September 2020.

“Confidence is now … lower than the level during the Delta surge,” ANZ Head of Australian Economics David Plank said on Jan. 18. “Consumer confidence readings are usually positive during the month of January, and the level of 97.9 is the weakest January result since 1992 when the Australian economy was experiencing sharply rising unemployment.”

However, Plank said the economy is not as weak as the data may suggest, with challenges of Omicron yet to impact underlying economic conditions strongly.

“But the result highlights that concerns about COVID have the potential to significantly impact the economy if they linger,” he said.

Meanwhile, results from the Westpac-Melbourne Institute Index of Consumer Sentiment painted a more optimistic picture, down 2 percent from December to 102.2 points in January.

This compares to the 5.2 percent drop during the first month of Delta and 17.7 percent downfall when the pandemic first hit in early 2020.

Confidence sentiment increased in New South Wales and Victoria but fell in other states, suggesting consumers who were heavily impacted during Delta were less unsettled by the latest variant.

Westpac Chief Economist Bill Evans said it was a surprisingly solid result, but there were increasing signs of nervousness.

“While the January sentiment result was resilient overall, responses over the course of the survey week—from Jan. 10 to Jan. 14—did show a deterioration suggesting some increased anxiety as the week progressed,” he said on Jan. 19.

According to ANZ-observed spending (pdf), there was a decline in spending of 27 percent during the first half of January compared to the first week of December. In previous years, it declined 17 to 21 percent.

ANZ Senior Economist Adelaide Timbrell said weakening consumer confidence during this period was another sign that spending could stay weak for “a while longer.”

Omicron has caused a shortage of PCR and rapid antigen tests (RATs) and a spike in close contacts, leading to broader supply chain issues due to isolation rules.