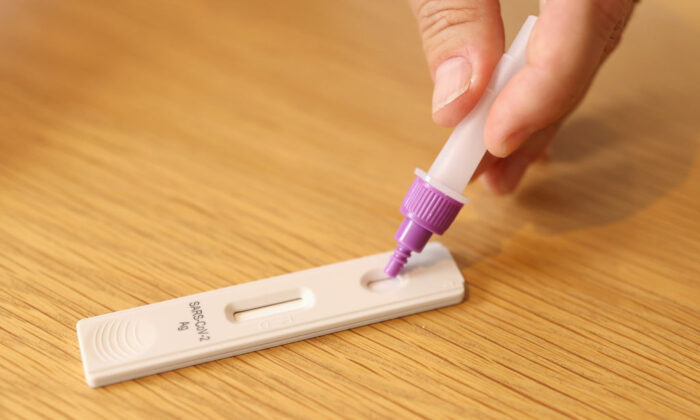 In this photo illustration a man uses a COVID-19 rapid antigen test kit at home in Sydney, Australia on September 29, 2021. (Photo by Cameron Spencer/Getty Images)
Australia

The test which is the brainchild of the Australian-based digital health company Gardian took 12 months in the making and is a “non-invasive, saliva-based rapid antigen test that is suitable for all ages and abilities including those with low-vision, are elderly, have issues with physical dexterity or have cognitive disabilities.”

The testing kit is easy to use and repeatable with a one-step process for extracting the sample with the kit only needing users to uncap the lid and put the testing cassette under the tongue to collect the saliva. The kit is also supported by a self check app that according to the video on the company’s website, takes the users step-by-step through the instructions to ensure accuracy and reliability.

Graham Gordon, CEO of Gardian in a media release on March 2 that the new test is the first of its kind that is simple enough for a child to do it.

“In our experience, there are not a lot of products offering a significantly high level of sensitivity and specificity while featuring functionality simple enough to suit users from age four,” he said.

The company also said that the test is “capable of identifying all current variants identified by the World Health Organisation” and is listed as “very highly sensitive.”

Intended for use in the first 7 days of symptom onset, the test promises a 96.64 percent sensitivity and 98.95 percent specificity from a clinical trial that included 594 participants (pdf), though no clinical reports were published verifying this.

Each kit will also be QR coded which can be traced back to its manufacturing, transportation, and distribution, details from the app will also be linked with a user’s contact details, time and location of testing so that users can be contacted if needed.

However, the testing kits will not be manufactured in Australia with the company instead using the Jiangsu Medomics Medical Technology Co Ltd in China (pdf).

The announcement comes after testing kits previously in collaboration with Gardian were suspended by the TGA after a post-market review in 2022 over concerns about their performance and safety.

Nonetheless, the Sheriff of NSW Department of Communities and Justice, Tracey Hall voiced her support for the Gardian RATs.

She said that they use the “user-friendly Gardian T3 tests as the health and wellbeing of all staff, court and tribunal users is of paramount importance.”

Gardian T3 is currently available for distribution in Australia from Feb. 22 but has yet to enter pharmacy shelves.

Meanwhile, recent studies on rapid antigen testing have shown conflicting data on the accuracy of using saliva-based samples with a Japanese study in 2021 showing that salivary samples are not a suitable replacement to nasopharyngeal swabs for rapid antigen detection.

Another 2021 study conducted in Europe argued that though RAT companies may report a high sensitivity and specificity in the clinical studies, that number can drop dramatically in real-world situations due to users making errors in the process.