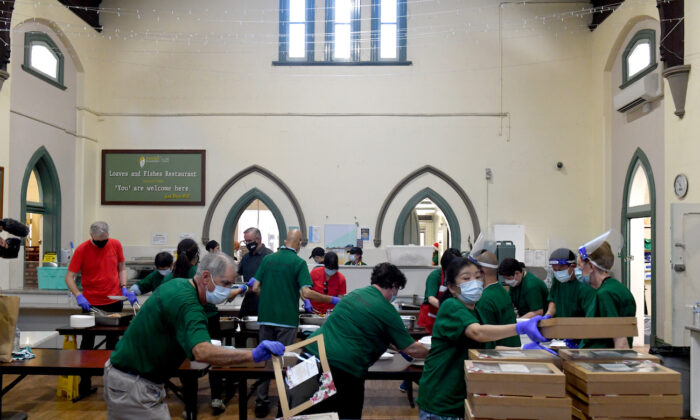 For many people Christmas is a day filled with joy, family and good cheer.

But for others it is the loneliest day of the year.

“It’s a time of year that many people feel a real sense of absence and loss and despair,” Wayside Chapel chief executive Jon Owen told AAP.

But that’s something charities like his are hoping to change, pulling out all stops to show love to people who are homeless, those who are ostracised from their families, and others separated from their loved ones by domestic and international borders.

It has already been a terrible year for most people, the pastor says, so the Wayside Chapel is determined that its annual Christmas lunch in Sydney’s Potts Point won’t be cancelled for the second year running.

“It broke our hearts last year not to be able to hold one in quite the same way,” he said.

“For so many of our people we are their family, so we’re still going to have a family Christmas this year and we are going to do it with more safety precautions than just about any other.”

There’ll be a Christmas service, live music and a visit from Santa to compliment the picnic lunch served between 11.30am and 2pm.

Volunteers will be fully vaccinated and decked out in PPE, and instead of chairs and tables, guests will sit on socially distanced rugs while eating their Christmas feast.

“We say to everyone, don’t be at home alone and miserable, come and be miserable with us,” Pastor Owen said.

It’s not just the guests who “have a hole in their hearts” at Christmas, he said.

Many volunteers sign up because they’re lonely too. This year several have lost children to suicide in the past year.

“They feel like it would be hollow to hold a Christmas celebration this year with an empty chair at the table,” he said.

“So they’re filling that hole in their heart by loving others who don’t have access to mums and dads and family.

Reverend Bill Crews will also be spending his 50th Christmas with the poor and lonely.

Some 2000 people are expected to come through the doors of his foundation’s hub in Ashfield in Sydney’s inner west, where volunteers are handing out takeaway Christmas meals and gifts.

Meals will also be delivered to 11 other locations across the city, and more than 4500 Christmas hampers have been distributed to families that would otherwise to put food on the table

Sacred Heart Mission in Melbourne has taken a similar approach, and will serve a takeaway Christmas roast and pudding for up to 500 people from its front courtyard at 87 Grey Street in St Kilda.

The mission, which offers vaccinations from a hub outside its St Kilda premises, hopes to reopen its dining hall next year but it will depend on vaccine uptake.

“Our biggest challenge is, for people to come into the dining hall, they need to be double vaccinated. So we’ve got a lot of work to do to increase those numbers,” Ms Humphrey said.

Uniting Victoria will deliver “Christmas in a box” to people in need within Melbourne’s inner suburbs, while the The Salvation Army is offering takeaway Christmas brunch and dinner from 69 Bourke Street in Melbourne CBD.

By Tiffanie Turnbull and Emily Woods