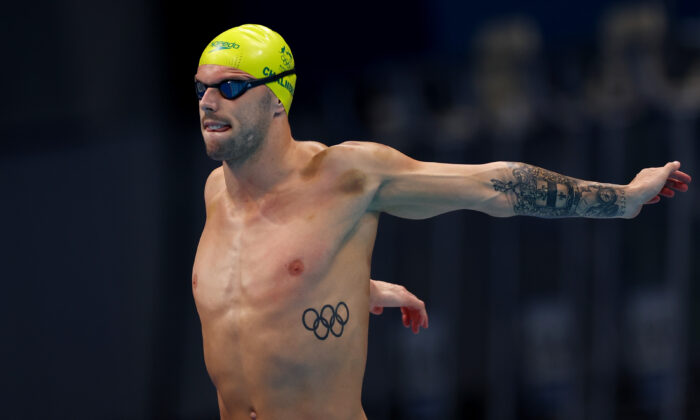 Kyle Chalmers of Australia before the Men's 100-meter freestyle heat at the Tokyo Aquatics Centre during the 2020 Tokyo Olympics in Tokyo, Japan, on July 27, 2021. (Kai Pfaffenbach/Reuters)
Sports News

Australia’s Kyle Chalmers set a short-course world record in the men’s 100-meter freestyle as he clinched gold at the World Cup in Kazan, Russia, on Friday.

Fresh from victory in the 50-meter freestyle on Thursday, the 23-year-old came home in 44.84 seconds, bettering the mark of 44.94 seconds set by France’s Amaury Leveaux in 2008.

Russian Valdimir Morozov finished almost a 1.5 seconds back in second place ahead of compatriot Kliment Kolesnikov in third.

Chalmers won gold in the 100-meter freestyle at the Rio Olympics in 2016 but only managed silver at the Tokyo Games this year, finishing behind American Caeleb Dressel.