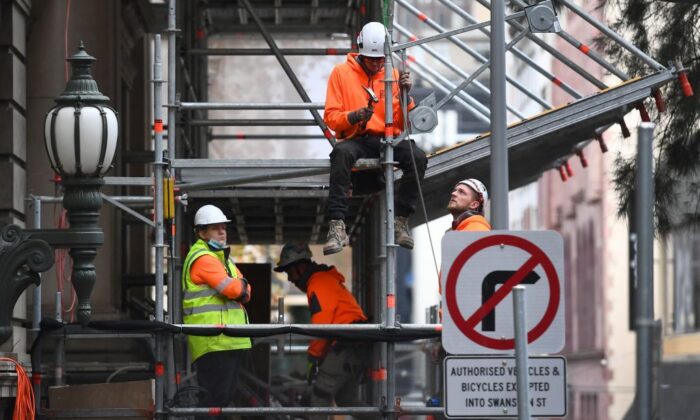 Construction workers work on a building in Melbourne, Australia, on May 28, 2021. (William West/ Getty Images)
Australia

The Australian Industry (AI) Group has called the federal Labor government’s decision to roll back the building code to its bare minimum and strip back the powers of the Australian Building and Construction Commission (ABCC) a “backward step” for the industry.

Innes Willox, the AI Group’s chief executive, said the announcement is of great concern to businesses and the broader community.

“It is a backwards step for the fight against bullying and intimidation and will add costs and delays to vital community infrastructures such as roads, hospitals and schools,” Willox said on July 25.

“The Building Code and the ABCC are playing a critical role in addressing bullying and intimidation by union officials on building sites. There are major skill and labour shortages in the construction industry, and it is, of course, difficult to attract people into the industry, including women and young people, without a respectful work environment.”

Willox said he believed that if the government continued with this plan, the construction industry will be at risk of not meeting the standards of work health and safety on job sites.

“How can it be a positive or appropriate step to abolish the drug and alcohol testing requirements that apply on projects funded by the federal government? Workers should not have to risk their lives or limbs by working alongside other workers who are impaired by drugs or alcohol,” he said.

The comments from Willox come after the federal Employment and Workplace Relations Minister Tony Burke made the announcement on the ABC Insiders program on July 24 that as of the 26th, the government would be rolling back the “powers of the ABCC to the bare minimum.”

Burke said what the ABCC was enforcing was ridiculous and could be done by another regulator or not at all. He also signalled that unions were no longer going to be targeted.

“We will no longer be spending taxpayers’ money determining what sticker someone’s allowed to put on their helmet, whether or not a safety sign has to be pulled down because it’s got a union logo in the bottom corner, or what flag might be flying at a building site,” Burke said. “Those sorts of issues should never have been something for an official government regulator to be wasting taxpayers’ money. As of Tuesday, those offences are gone all together.”

Further, Burke confirmed that the rollback will mean that building and construction workers will now be able to freely bargain for agreements in the same way as other workers. This will include agreements that include clauses promoting job security, jobs for apprentices, and safety at work.

The decision to dump the ABCC was expected by the Albanese government, which had campaigned for its removal during the May election.

The Australian Council of Trade Unions welcomed the announcement by Burke, with ACTU Secretary Sally McManus saying it was the first and most important step to the Albanese government fulfilling its commitments.

“The Code was one of the ideological projects of the previous government, which spent nearly a decade attacking unions and suppressing wages,” McManus said.