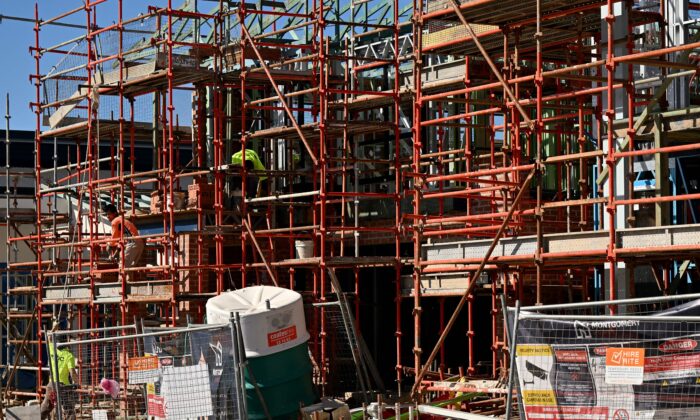 Labourers work on a house under construction in western Sydney, Australia, on Aug. 2, 2022. (Saeed Khan/AFP via Getty Images)
Australia

The Australian housing industry saw a sharp fall in the number of buildings approved in July amid soaring building costs and interest rate hikes.

According to the Australian Bureau of Statistics (ABS), total building approvals across the country tumbled by 17.2 percent in July compared to a modest 0.6 percent drop in June.

The sharp decrease was led by a lack of approvals for apartments and units, with the number of non-house dwellings approved for the private sector plunging by 43.5 percent.

ABS head of construction statistics Daniel Rossi said the above figure was the lowest level recorded since January 2012.

On the other hand, there was a slight increase of 0.7 percent in house approvals.

The drop in total dwelling approvals in July was much higher than market expectations, with ANZ Research analysts Brian Martin and Daniel Hynes predicting a 10 percent decrease for the month.

Western Australia saw the most significant fall in dwelling approvals among the jurisdictions at 36.9 percent, followed by Victoria at 17.4 percent and New South Wales at 16.2 percent.

At the same time, the total value of buildings approved fell by 12.9 percent in July compared to a 6.2 percent decline in June.

Reforms To The National Construction Code

The federal government said the reforms would ensure that new homes in Australia would be more comfortable, liveable, accessible and energy efficient.

“These are historic reforms to improve the efficiency of homes and accessibility for older Australians and those living with disabilities,” Industry and Science Minister Ed Husic said.

“We are helping Australians live in new homes that are more comfortable, more sustainable and more supportive for people with mobility constraints.”

The new changes will make it more costly for Australians to build their homes, with Master Builders Queensland, a peak industry body, predicting that homeowners would have to pay an extra $30,000 (around US20,600) on average.

In comparison, government modelling suggested that the new changes would cause building costs to climb by $6,000.

“It’s the first homebuyers who are most impacted, who are struggling to get a deposit together, to make the repayments, and then the cost of construction goes up,” Master Builders CEO Paul Bidwell said, as reported by ABC.