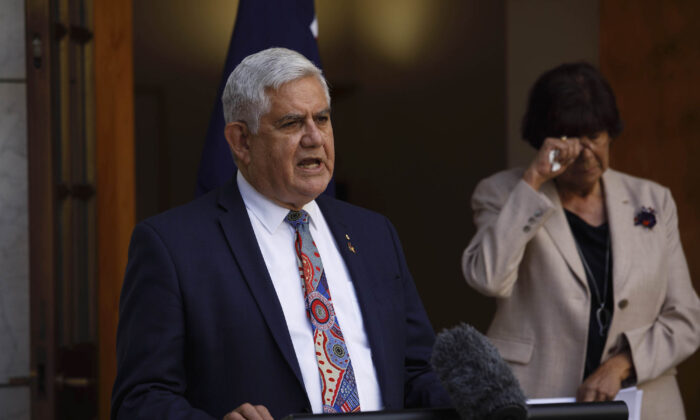 Indigenous Australians Minister Ken Wyatt at the announcement of the targets for the Closing The Gap initiative at Parliament House in Canberra, Australia on July 30, 2020. (Sean Davey/Getty Images)
Australia

These measures will include creating more jobs and wealth-building programs and elevating Indigenous voices across Australia.

In a media release published shortly before the budget delivery, Indigenous Australians Minister Ken Wyatt announced that the Morrison government’s Indigenous policy reform agenda is one of the most ambitious to date.

“Alongside our priorities under Closing the Gap, we are making strong headway on the National Roadmap for Indigenous Skills, Jobs and Wealth Creation, building the capacity of Prescribed Bodies Corporate, progressing the establishment of Indigenous Local & Regional Voices and reforming the Community Development Program,” he said.

“It’s all part of our new partnership approach. We are deepening partnerships with Indigenous Australians, ensuring Aboriginal and Torres Strait Islander voices inform the policies and programs that affect them.”

The minister announced a number of new initiatives, including more than doubling the Indigenous Ranger Program, in an effort to create more jobs while caring for country ( the Indigenous Australian term for their community’s land and waterways), building skills, and bolstering disaster resilience and recovery.

Funding of $636.4 million (US$479 million) over six years will go towards employing an additional 2,000 rangers in regional and remote Australia, providing long-term jobs and better environmental outcomes.

The additional positions will take the total number of rangers in the program to around 3,900 by 2028.

“It will address the unmet demand for cultural burning and other Indigenous land management expertise in areas outside of the current ranger footprint and also help Australia meet a range of international environmental commitments,” Wyatt said.

A further $37.5 million ($28.2 million) will fund the strengthening of the governance of Prescribed Body Corporates (PBCs), which manage the interests of native title holders.

This includes establishing a PBC Steering Group, expanding training for PBCs by the Native Title Council to upskill directors and staff members, and supporting the Registrar of Indigenous Corporations to undertake their role as native title regulators.

Another priority is Indigenous leadership and governance, for which $21.9 million ($16.5 million) in funding had already been announced.

This will enable the Australian Mentoring Experience to expand, the Registrar of Indigenous Corporations to develop training materials, and the National Indigenous Australians Agency to award scholarships to emerging Indigenous leaders.

In line with the Indigenous Voice Co-design Process Final Report, the federal government has pledged $31.8 million ($24 million) for the first year to support the designing of Local and Regional Voice structures.

The Indigenous Voice program is designed to enable Indigenous Australians to “have a greater say on the design, development and implementation of policies and programs that affect them.”

This extension will support 1,000 jobs in regional Australia until 2024-25 and help around 1,600 Indigenous families access home loans.

Wyatt said these 2022-23 budget measures build on the government’s long-term commitment to Closing the Gap and facilitating a stronger future for Indigenous Australians.

However, some critics have said Indigenous funding has fallen short, with Pat Turner, co-chair of the Coalition of Peaks and the National Aboriginal Community Controlled Health Organisation’s CEO, telling National Indigenous TV (NITV) that the Budget lacked targeted spending, particularly in the area of Indigenous health, noting that Indigenous Australians have far higher rates of disease.

“Aboriginal kids aged between five and 15 years old are 50 times more likely to die from rheumatic heart disease than other Australian children,” Turner said. “I was hoping that we would get a substantial investment.”

Additionally, Cheryl Axleby from Change the Record has said that while the government has committed to reducing the rate of young Indigenous Australians in detention by at least 30 percent by 2031,  it was disappointing that the investment announced in the Budget is not matching their commitment.

“We’ve had five Aboriginal deaths in custody this year; we are still experiencing high incarceration rates for our people in this country,” she said.

Although the government will extend Custody Notification Services in WA and the NT, Axleby said there was inadequate funding for justice, early education and learning, as well as violence against women.