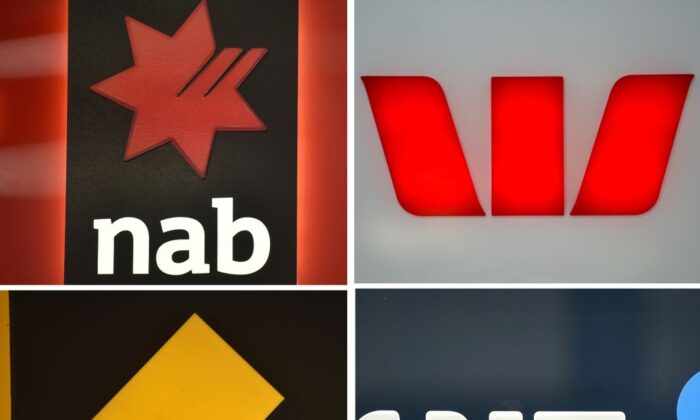 This combination of photos taken show the signs of the "big four" Australian banks in Sydney, Australia, on Nov. 30, 2017. (Peter Parks/AFP via Getty Images)
Australia

Australian homeowners with a mortgage will soon feel the effect of the Reserve Bank of Australia’s latest rate hike as the country’s big four banks are passing the increase on to customers in full.

ANZ, Commonwealth Bank of Australia (CBA), Westpac and National Australia Bank have announced that they will raise the variable rates of their home loan products by 0.5 percent for existing and new customers from the week commencing Aug. 8.

At the same time, the banks will increase the deposit rates on certain saving accounts by a similar percentage.

This comes after Treasurer Jim Chalmers called on commercial banks to pass on the rate increases for both home loans and deposits.

CBA retail banking chief Angus Sullivan said the bank, which was the first to lift variable rates, would offer owner-occupiers a four-year fixed home loan package rate of 4.99 percent for a limited time.

“This special is a reduction of 1.60 percent per annum from our current four-year fixed package rate and has been rolled out especially to support customers looking for certainty in a changing rate environment,” he said.

In a similar move, Westpac announced a special four-year fixed rate of 4.99 percent and said it would increase the deposit rates on two of its most popular saving accounts to boost customers’ returns.

Westpac consumer and business banking chief executive Chris de Bruin said the bank was aware that the rise would add pressure on some customers.

“We’re here to support these customers and encourage them to give us a call,” he said.

“New and existing customers could fix their loan for four years which may provide more certainty over their repayments, or split their loan between fixed and variable rates.”

Meanwhile, ANZ lifted the rate on its ANZ Plus Save accounts with balances of less than $250,000 (US$174,000) to 2.5 percent per year and said it was reviewing other long-term saving rates.

“So today, we have tried to provide some relief for them with a range of deposit rate increases,” she said.

National Australia Bank was the last to announce the changes to variable home loans and saving rates that would come into effect on Aug. 12.

Personal banking group executive Rachel Slade urged customers to contact the bank if they had difficulties.

“Please get in touch–the earlier, the better,” she said.

“The first step is a conversation so we can help you get back on track.”

As interest rates continue to hike, more and more Australian mortgage holders switch banks to get a better deal.

New data from the Australian Bureau of Statistics showed that the value of external refinancing for owner-occupier housing jumped 9.7 percent in June to a new record high of $12.7 billion, up 24.6 percent compared to a year ago.

Although the value of external refinancing for investors dipped by 1.2 percent in the month, the figure was 4.6 percent higher than the past year.