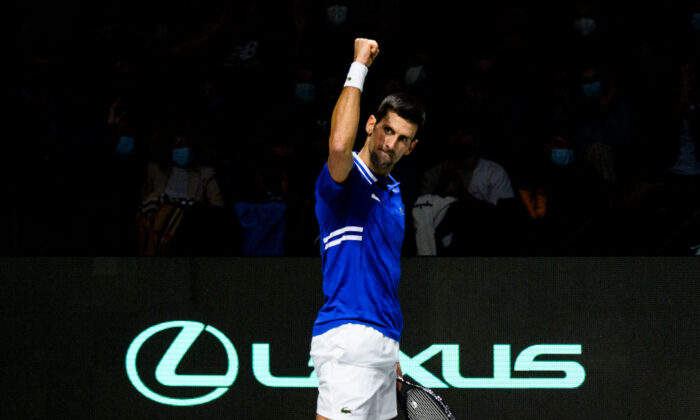 Novak Djokovic of Serbia plays a backhand against Marin Cilic of Croatia during the Davis Cup Semi Final match between Croatia and Serbia at Madrid Arena pavilion on December 03, 2021 in Madrid, Spain. (Juan Naharro Gimenez/Getty Images for Lexus)
Viewpoints

Australian Authorities Had Grounds to Deny Djokovic, but Bumbled the Process

As predicted, the fallout from the Novak Djokovic debacle is already haunting the federal government. Ellen Ransley, in an article published by News.com.au, reported on Jan. 11 that several politicians urged the prime minister to clean up the Djokovic visa mess.

It argued that the reputation of the government and the Australian Open had been irretrievably damaged because Australia failed to clearly express its position on the issue of quarantine-free entry.

Within hours of the Federal Circuit Court’s quashing of the cancellation of Djokovic’s visa, the champion tennis player was already training in the Rod Laver Arena. He posted a picture with his team, beaming a smile of a victorious warrior.

The government’s court case crashed because of bureaucratic irregularities at the entrance border on Jan. 5 when Djokovic arrived in Melbourne. However, the government has indicated to the judge, Anthony Kelly, that it retains the right to still cancel the visa and deport Djokovic.

In view of the details emerging from this case, there are valid reasons justifying Djokovic’s removal from the country. First, Tennis Australia indicated to the players that a medical exemption had to be sought before Dec. 10, 2021, to enable unvaccinated players to quarantine in Melbourne before the start of the Open. Djokovic only applied around Dec. 16 when he received a positive COVID-19 test.

However, on that day and the following one, Djokovic participated in various activities in Belgrade, Serbia, handing out awards to young tennis players, among other things.

Thus, his claim that he contracted the disease is either not true, or if he contracted the disease, he acted irresponsibly because he should have isolated himself rather than exposing other people to infection. This could well be a second reason as to why the Minister of Immigration, Alex Hawke, might use his discretion to send him back to Serbia.

Third, even if the medical exemption is valid as decided by Judge Kelly, he would still be expected to quarantine for 14 days because quarantine-free entry is only available to fully vaccinated players. As Djokovic only arrived late on Jan. 5, he would not be able to meet this requirement.

Hence, although the border force authorities bumbled the situation when Djokovic arrived in Melbourne, there may well be sufficient reasons to send him back to Serbia.

But now that the court case has taken its course, the decision to deport is a political decision.

In this context, it is instructive to remember the confident assertion by Prime Minister Scott Morrison that the entrance rules are implemented impartially by the border force and that rules are rules, which apply to every applicant for entry into Australia, regardless of their wealth, fame, or reputation. Unfortunately, in retrospect, the prime minister has spoken too early, not knowing exactly what had occurred when Djokovic was interrogated at the border.

Any decision by the federal government—the government responsible for issuing visas—is fraught with danger and may cause an electoral backlash. If Djokovic is deported, the supporters of the Serb champion tennis player will be enraged, and diplomatic relations with the Serbian state would become precarious.

On the positive side, the government would have an opportunity to sell the idea to the electorate that our immigration rules apply, without fear or favour, to all applicants.

However, a deportation usually comes with a three-year ban. This would be too harsh an action in view of the bumbling of the border force at the airport in Melbourne. Hence, if the immigration minister were to decide to go down the path of deportation, it should be made clear that the three-year ban would not be applied in his case.

However, if Djokovic is allowed to play in the Australian Open, the perception of rule-breaker would follow him throughout the tournament. He might still be regarded as having benefited from a corrupt system of preferential treatment.

Additionally, his decision to contest the decision of the border force would mark him as a litigious person who was able to overturn the decision by his connections and wealth.

For these reasons, it is reasonable to expect that the electorate, at the next election expected to be held in March or May, will punish the government for mismanaging this affair.

Hence, there are no easy solutions for the government.

If Djokovic plays in the Open to defend his title and seeks to eclipse the 20 grand slams of Federer and Nadal, it will be good for the sport of tennis. This is because it is always intoxicating to see the best players in the world to battle it out on the tennis court.

However, it falls to be seen how the drama has impacted Djokovic’s ability to play, considering the reduced preparation time and the stress undoubtedly caused by the court case. But alternatively, it may have strengthened his determination to prove to the world that he is indeed the worlds men’s Tennis Number One.

All will be revealed in the next fortnight!