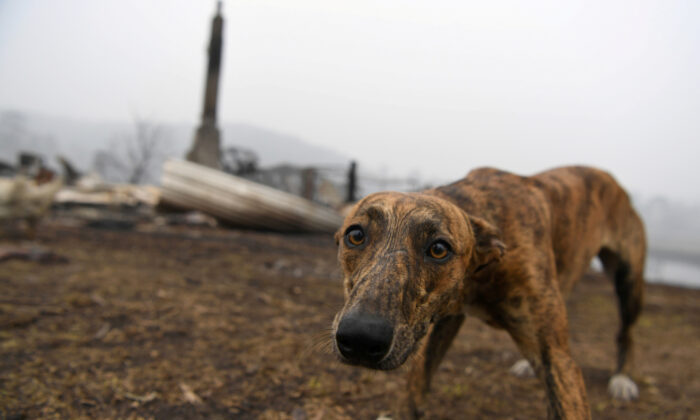 A dog visits the burnt out property of its owner's family member in Kia, Australia, Jan. 8, 2020. (Reuters/Tracey Nearmy)
Australia

SYDNEY—Australian authorities warned people on Wednesday to prepare for another wave of evacuations as temperatures in the country’s southeast began to rise after a days-long cool spell, bringing the danger of revitalized blazes.

Firefighters have used the break from extreme heat and high winds to strengthen containment lines around several major fires, as the military continued efforts to provide supplies to thousands of people who have been left homeless.

Complicating the recovery effort, authorities have forecast another temperature spike as soon as Friday, with little rain, meaning a return to hazardous conditions.

More than 10.3 million hectares (25.5 million acres) of land – an area the size of South Korea – have been razed by bushfires that have killed 24 people in recent weeks.

Ecologists at the University of Sydney on Wednesday doubled their estimate of the number of animals killed or injured in the fires to 1 billion, as the U.N. World Meteorological Organization confirmed that smoke from the blazes has drifted as far as South America.

The three major cities in Australia’s southeast, Sydney, Melbourne and the capital Canberra, were all blanketed in thick smoke, putting them among the most polluted cities in the world.

In rural areas, many towns were without power and telecommunications and some were running low on drinking water supplies.

The bushfires crisis follows a three-year drought that has left much of the country’s bushland tinder-dry and vulnerable to fires.

Following are some notable news from the latest bushfire season in Australia:

By Colin Packham and Byron Kaye