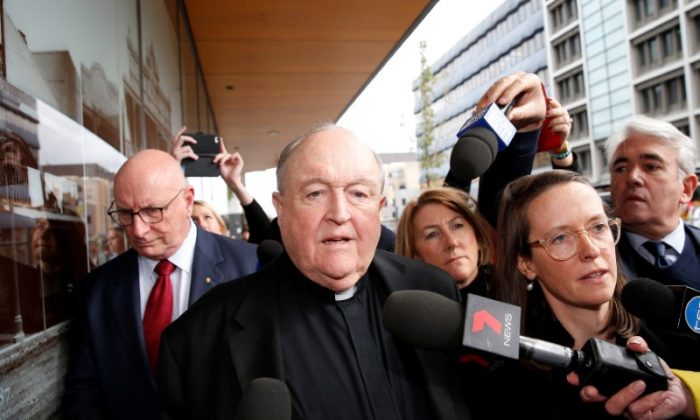 SYDNEY—An Australian archbishop, the most senior Catholic cleric in the world found guilty of concealing child sex abuse in the church, said on July 4 he would appeal his conviction and resist pressure to resign.

Philip Wilson, 67, was convicted in May of not disclosing to police abuse by another priest, James Fletcher, after being told about it in 1976 by two victims, one of them an altar boy who told him inside the confessional.

He has stepped aside as archbishop of Adelaide, but has not resigned, despite pressure from Prime Minister Malcolm Turnbull as well as victims’ groups.

“I intend to lodge an appeal against my conviction,” Wilson said in an emailed statement on July 4.

“I do not intend to resign at this time. However, if I am unsuccessful in my appeal, I will immediately offer my resignation to the Holy See.”

Lawyers for Wilson, who maintained his innocence throughout the legal process, had argued that he did not know Fletcher had abused a boy. Fletcher was found guilty in 2004 of nine counts of child sexual abuse and died in jail in 2006 after a stroke.

Wilson was sentenced on Tuesday to a year’s detention over the cover-up, but remains on bail while he is assessed by prison authorities for home detention, instead of jail.

“I am surprised that he has not resigned,” Turnbull had told reporters in South Australia on July 4. “Clearly, given the outcome of the case, the lawsuit and prosecution, he should resign.”