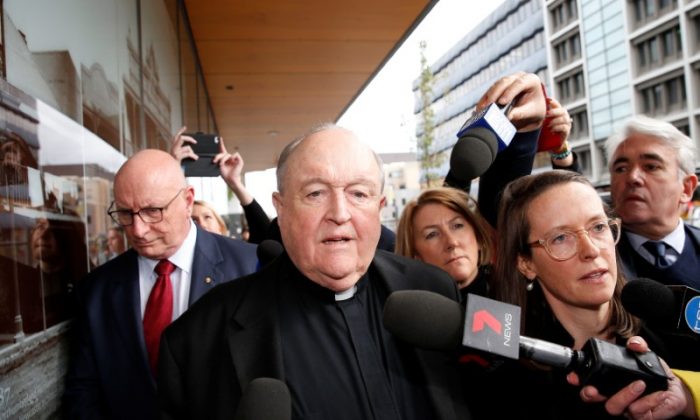 Pope Francis accepted the resignation of Australian Archbishop Philip Wilson amid mounting calls for the high-ranking cleric to step down, following an earlier conviction for failing to report allegations of child sexual abuse.

The Vatican made the announcement in a sentence-long statement released on July 30.

In May, Wilson, 67, was convicted by an Australian court for not disclosing to police the abuse committed by a pedophile priest after Wilson was told about it in 1976 by two victims, one who was an altar boy.

The boys, who were 10 and 11 years old at the time, said Wilson did nothing with the information after they told him. The priest who abused them, James Fletcher, was convicted in 2004 of nine counts of child sexual abuse. He died of a stroke in 2016, while in prison.

Wilson was sentenced in July to a 12-month sentence but likely will spend it through home detention, as authorities assess the case.

“I welcome Philip Wilson’s resignation as archbishop of Adelaide today, which belatedly recognizes the many calls—including my own—for him to resign,” Australian Prime Minister Malcolm Turnbull said on July 30. “There is no more important responsibility for community and church leaders than the protection of children.”

Wilson, who submitted his resignation on July 20, said he made the decision because he became “increasingly worried at the growing level of hurt that my recent conviction has caused within the community.”

The president of the Australian Catholic Bishops Conference, Mark Coleridge, said in a statement on the same day that the judicial process in Wilson’s case was to continue, that the resignation is the next chapter in a “heartbreaking story of people who were sexually abused.”

“This decision may bring some comfort to them, despite the ongoing pain they bear,” he said.

When the case was first raised in May, Wilson stepped away from his role as Archbishop of Adelaide but refused to resign amid growing pressure from Turnbull calling for his full resignation. In July, he also said he would appeal his conviction.

Only the pope can approve the resignation of an archbishop of Wilson’s status. It is the second time within a week that Pope Francis has taken such action. On July 28, the pope accepted the resignation of Cardinal Theodore McCarrick of Washington after accusations surfaced that he sexually abused a minor.

McCarrick, an 87-year-old political force in Washington, maintains his innocence. A review board comprising psychologists, law enforcement experts, jurists, parents, a priest, and a religious sister concluded that an allegation that he abused a teenager almost five decades ago was “credible and substantiated.”

A soon-to-be-released report on clergy sex abuse by a Pennsylvania grand jury identifies over 300 “predator priests” in six of the state’s Catholic dioceses, according to The Morning Call.

The report, which reviews decades-old allegations of cover-up efforts by clergy, will be made public without the names of or “individual-specific information” about the priests after some challenged the initial version of the findings. The 900-page report is expected to be released on Aug. 8.

Pennsylvania Attorney General Josh Shapiro said the court’s recent decision to make the report public, even with redactions, is a win.

“Our fear throughout this process has been that the entire grand jury report would be shelved and victims’ truth would be silenced,” Shapiro wrote on Twitter on July 27. “Today is a victory for survivors, but our work is not yet done.”

On July 11, a report compiled by law firm Jeff Anderson and Associates PA and the Law Office of Mark Gallagher found that 58 priests in Hawaii have been accused of sexually abusing children.

The report found that high-ranking church officials at the Diocese of Honolulu had knowledge that Bishop Joseph Ferrario had sexually molested children before he was appointed bishop. Local psychiatrist Dr. Robert Browne, who “treated” the sexually abusive priests, “recommended predatory clerics return to ministry,” according to the report, which stated that Browne himself “was a prolific pedophile that abused many children throughout his career.”

In May, the Diocese of Buffalo,New York, released a list of diocesan priests “who were removed from ministry, were retired, or left ministry after allegations of sexual abuse of a minor.” In total, there were 42 mentioned. But according to media reports, the actual number is higher.

In Wyoming, a new investigation was opened into allegations Bishop Emeritus Joseph Hart sexually abused two boys from Wyoming after he became the bishop of Cheyenne, according to a July 2 release.

Bishop Steven Biegler, from the same diocese, said he was continuing restrictions placed on Hart years ago, after the boys’ claims were found to be “credible and substantiated.”

“Nothing is more important than the safety of our children,” Biegler said. “We have zero tolerance for sexual abuse of any kind. If there is ever any indication of abuse brought to our attention, it will be reported to the civil authorities and investigated thoroughly, even when the allegations involve a bishop.”

Correction: A previous version of this article misstated the date Archbishop Philip Wilson submitted his resignation. Wilson resigned on July 20. The Epoch Times regrets the error.