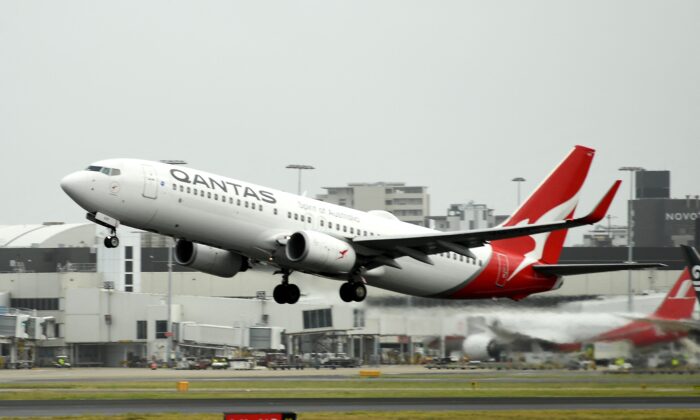 A Qantas plane takes off from the Sydney International airport in Sydney, on May 6, 2021. (Saeed Khan/AFP via Getty Images)
Companies

Qantas, Australia’s flag carrier, has asked its senior executives to work as baggage handlers as the company struggles to hire employees.

“The high levels of winter flu and a Covid spike across the community, coupled with the ongoing tight labor market, make resourcing a challenge across our industry,” said Colin Hughes, Qantas chief operating officer, in an email, according to BBC.

The executives and managers are expected to work in baggage handling for four to six hours each day, five days a week, for a three-month period. Applicants must have the ability to move suitcases weighing up to 32 kilos (70.54 pounds).

In addition to loading and unloading bags, they also must drive vehicles to move luggage around the airport. The company is looking for a minimum of 100 volunteers to do such work at the Melbourne and Sydney airports.

Qantas was among the airlines that were hard hit by the pandemic, as Australia had maintained one of the most stringent COVID-19 travel restrictions in the world. The country started lifting these restrictions only in November 2021. In the early period of the pandemic, the company was even close to bankruptcy.

During the lockdown period, Qantas terminated at least 1,600 baggage handlers and outsourced the service to contractors. A federal court has judged the move to be unlawful, and the company is planning to appeal the decision.

The airline has been plagued with numerous consumer grievances in recent times, including lost baggage, long queues, and canceled flights.

In a statement to Fortune, a Qantas spokesperson said that “operational performance has not been meeting our customers’ expectations or the standards that we expect of ourselves.” The company is “pulling out all stops to improve our performance.”

Since April, around 200 management staff and executives have volunteered to operate on the ground, he added.

The Epoch Times has reached out to the airlines.

In a July 17 op-ed published at the Qantas newsroom, Domestic and International CEO Andrew David highlighted several issues that have led to the airline being in a tough spot at present.

“Restarting an airline after a two-year grounding is complex. And aviation labor markets, as with many others, are extremely tight. Compounding that is the fact that COVID cases are steeply on the rise again at the same time as the winter flu season,” David wrote.

He also dismissed arguments that the decision to outsource ground handling is a key contributor to why the operational restart has been hard.

The company is recruiting more than 1,000 workers, rostering more people on standby, and has doubled the number of people working at call centers, David added.