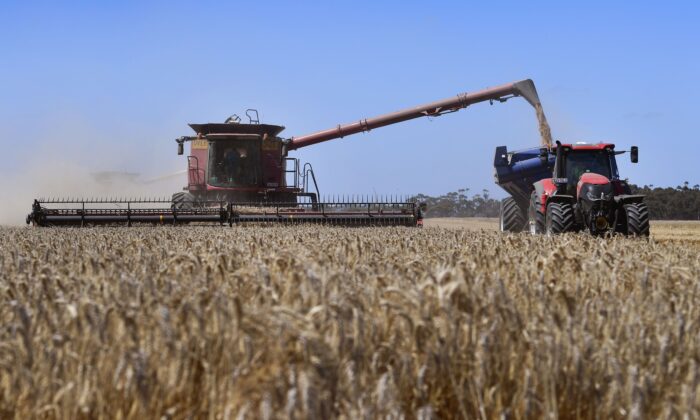 A photo taken shows a paddock of wheat being harvested on a farm near Inverleigh, Australia, on Jan. 12, 2021. (William West/AFP via Getty Images)
Australia

Andrew Smith, the head of sales of Rural Bank, said farmers had seen strong results due to favourable seasonal conditions in most parts of the country. Additionally, it was forecast that agriculture’s solid performance would continue to remain.

“It’s a good outlook and quite positive, and it’s great to see this three years in a row for our producers … where we’ve had good conditions across both the seasons and commodity prices,” Smith said in comments obtained by AAP.

While producers in Queensland and New South Wales suffered from heavy rainfall and flooding earlier this year, seasonal conditions were boosting production in most agricultural sectors.

It was expected that wet conditions would continue throughout much of the country until September, with a third La Nina weather event likely to occur in the summer.

In addition, the report predicted that Australian winter crop production would stay above average for three consecutive seasons, and horticulture performance would return to strong levels following the flood crisis in Queensland.

Smith said it was expected that the country would see robust results in beef, sheep meat, wool and dairy production in the second half of 2022.

Furthermore, he noted that while global trade conditions had presented challenges to some exporters, Australia had been able to diversify its agriculture customer base in 2021.

“For example lamb, we’ve been growing pretty strongly our lamb exports into the United States for the last couple of years, but this last 12 months we’ve seen markets like the UAE, South Korea, Malaysia, Saudia Arabia increasing as well.”

At the same time, the report said little to no grain supply from Ukraine had caused demand for Australian grain to soar, especially throughout Asia.

However, it stated no tangible signs of improvement were observed in the relationship with Australia’s largest trading partner China as the country still imposed tariffs on Australian barley, wine, lobster and beef.

As the year wore on, Smith said seasonal conditions, trade conditions and supply chain disruptions would shape Australia’s agriculture output in the remainder of 2022.