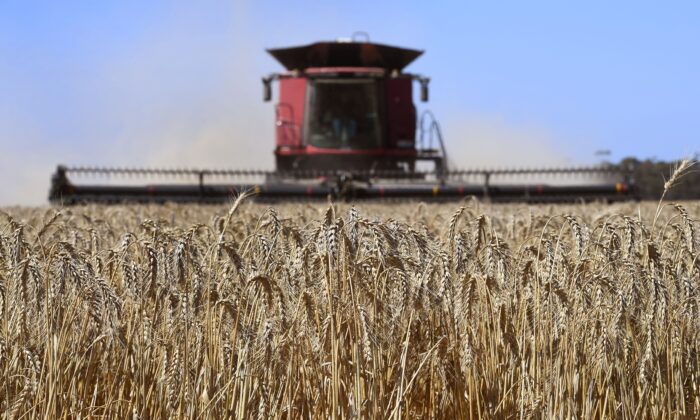 A photo taken shows a field of wheat being harvested on a farm near Inverleigh, Australia, on Jan. 12, 2021. (William West/AFP via Getty Images)
Australia

The Australian agriculture sector is anticipated to produce $80.4 billion (US$57.9 billion) worth of products in the 2022-2023 financial year, the second-largest amount ever recorded.

This forecast comes even though producers are grappling with labour shortages and ballooning input costs, with world fertiliser prices hitting the highest levels since 2008.

Jared Greenville, the executive director of the Australian Bureau of Agricultural and Resource Economics (ABARES), said the next financial year would be remarkable for the sector.

“But we’re also seeing strong growth in the horticulture sector, which is set to hit a record value as well.”

According to the ABARES quarterly outlook published by the department of agriculture, food prices have risen significantly as a result of poor prospects for world food production, the Russia-Ukraine war, and trade restrictions.

However, the gross value of agricultural production for 2022-2023 is predicted to be lower than last year’s high of $83.1 billion, with exports likely to reach a record of $65 billion.

At the same time, grain producers are anticipated to achieve their fourth largest and second most valuable winter crop as global grain prices go up.

The report also found that although adverse weather conditions and flooding caused damage to some crops, they did not have a considerable impact on the national production levels.

In addition, the outlook forecasts that horticulture will deliver $13.5 billion worth of produce, while wheat and canola production will reach $12.7 billion and $5.1 billion, respectively.

Meanwhile, livestock production is projected to increase by 1.2 percent to $35 billion in the next financial year.

Furthermore, the report forecasts that the Australian beef herd will rise by six percent to 24.2 million heads, while the total number of sheep will hover around 69 million.

It is noteworthy that global food prices currently stay at their highest levels in a decade and are not likely to trend down in the remaining of 2022 and into 2023.

In May, the World Bank said that global food prices had increased for two years and reached a record high during March and April 2022. Prices soared by 15 percent over the period and were 80 percent higher than two years ago.