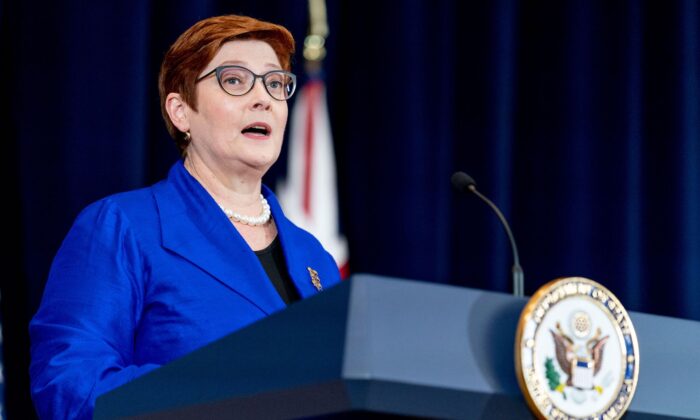 Australia Working With Partners on ‘Deep and Serious’ Sanctions on Russia: Foreign Minister

Ministry in contact with remaining Australians in Ukraine
By Daniel Y. Teng

Australia is working with democratic allies to impose additional sanctions on Russia following President Vladimir Putin’s decision to send troops into the Ukrainian regions of Donetsk and Luhansk.

“Australia has been working with like-minded partners, including the United States, UK, and Canada on what our sanctions options look like,” Foreign Minister Marise Payne told 2GB Radio on Feb. 22.

“Australia has been imposing autonomous sanctions in relation to Russia’s threats to ukraine for many years now,” she said, noting that any additional sanctions would be “deep and serious” and have a real impact.

“I don’t think it’s useful to run details of the sanctions—all that does is enable those who might be sanctioned to try to avoid them,” she added.

Payne also said Australia’s Department of Foreign Affairs was in contact with 1,400 citizens in Ukraine.

“Many have been their for a very long period of time, and in fact essentially that’s their home … we’ve endeavoured through the post in Kiev, and through my department, to engage in contact with them,” she said.

The minister also appealed to Russian leaders that an invasion of Ukraine was “not inevitable.”

“This does not have to happen. There are still choices to be made by Russia here, and we hope that we can see productive discussions continue—and this be avoided,” Payne said.

Russia currently has around 150,000 troops stationed along the Ukrainian border with ongoing concerns Putin could invade the eastern European nation.

Instead, on Feb. 21, Putin signed a decree recognising the independence of the separatist Donetsk and Luhansk regions in eastern Ukraine—territories internationally recognised as being under Ukrainian control.

“Ukraine most certainly considers these last Russian actions as the violation of the sovereignty and territorial integrity of our country,” he said.

“All responsibility for all the consequences connected with the decision mentioned above lies on the Russian political leadership. The recognition of independence of the occupied territories of Luhansk and Donetsk regions might mean the unilateral withdrawal of Russia from Minsk agreements.”

The U.S. government has imposed sanctions in response to the move, prohibiting “new investment, trade, and financing by U.S. persons” to and from the two breakaway regions.