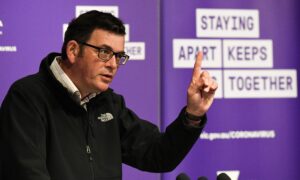 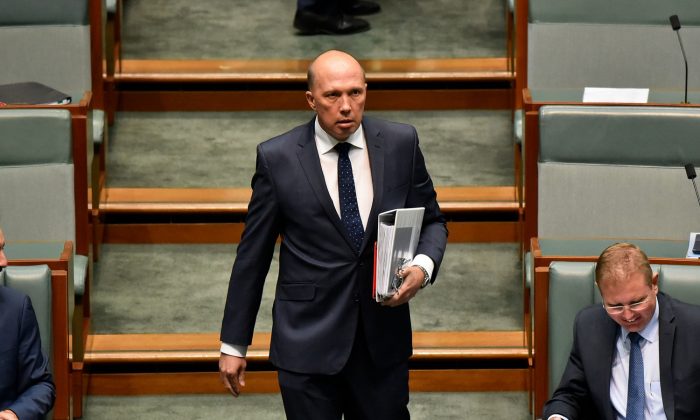 Peter Dutton, Minister for Home Affairs and Minister for Immigration and Border Protection enters the House of Representatives before Question Time on Feb. 5, 2018 in Canberra, Australia. (Michael Masters/Getty Images)
Australia

Australia will not sign the United Nations global migration deal “in its current form,” with Immigration Minister Peter Dutton saying that it’s not in the nation’s interest to sign the agreement.

In an interview with 2GB on July 25, Dutton was pressed on whether Australia would sign The Global Compact for Safe, Orderly and Regular Migration—an agreement negotiated by U.N. member states with the aim to “improve the governance on migration” and address the challenges that migrants face.

A spokesperson for the immigration minister told The Australian on July 24 that Australia was still considering its position on the agreement and will “respond later in the year,” leaving open the door for the Turnbull government to withdraw from the deal if needed.

Dutton insisted that the Turnbull government will not “sign a deal that sacrifices anything in terms of our border protection policies.”

The agreement’s final draft was released by the U.N. on July 11. It states that countries should agree to use “immigration detention only as a measure of last resort.”

The deal pushes U.N. member states to “review and revise” laws and policies to ensure that decisions to detain are “based on law, are proportionate, have a legitimate purpose, and are taken on an individual basis” and should not be used “as a deterrent.”

U.N. Secretary-General Antonio Guterres has been critical of Australia for implementing a number of strong measures to “stop the boats,” including offshore detention and processing to deter asylum seekers from coming to the country by boat. The policy was aimed at stopping the people smuggling trade and deterring asylum seekers from embarking on dangerous sea journeys.

Dutton said that the Turnbull government will ensure that they don’t sacrifice the policies they had fought hard to bring in.

“We’re not going to allow the people smugglers to get back into the business,” Dutton told 2GB.

The immigration minister acknowledged that although Australia had a hand in negotiating the deal, which was spearheaded by Mexico and Switzerland, Australia will not sign over its border protection policy to the U.N.

In response to the release of the agreement’s final draft, the Australian Mission to the U.N. reiterated Australia’s position on migration on July 13.

“Only through a balance of strong border controls, lawful and well-managed migration programs, and considered and coordinated humanitarian responses can the full benefits of migration be realised, and the interests of migrants and states be protected,” the statement read.

The compact came about after 193 U.N. member states adopted the New York Declaration for Refugees and Migrants on Sep. 19, 2016. The agreement, which could be signed in December this year, provides a framework for facilitating safe and orderly migration globally with an effort to deal with migration “in a holistic and comprehensive manner.”

Nikki Haley, U.S. ambassador to the U.N., said at the time, “America is proud of our immigrant heritage and our long-standing moral leadership in providing support to migrant and refugee populations across the globe.”

“But our decisions on immigration policies must always be made by Americans and Americans alone. We will decide how best to control our borders and who will be allowed to enter our country,” she said in a statement.

In response, Miroslav Lajčák, the president of the general assembly, said it regrets the decision of the United States.

“The role of the United States in this process is critical as it has historically and generously welcomed people from all across the globe and remains home to the largest number of international migrants in the world,” Lajčák said in a statement.

“As such, it has the experience and expertise to help ensure that this process leads to a successful outcome.”

Following the United States, Hungary announced their withdrawal to the agreement on June 18 this year.

Their Minister of Foreign Affairs and Trade Péter Szijjártó said in a statement that the agreement was “totally at odds with the country’s security interests.”

“The primary issue for us is the security of Hungary and the Hungarian people,” Szijjártó said in the statement.

“According to the government’s position, the U.N. Global Compact for Migration is in conflict with common sense and also with the intent to restore European security.

“Hungary does not regard the goals and principles declared by the Compact as valid guidelines with regard to itself.

“In addition, the document does not deal with the truly existing fundamental human rights of people who want nothing else than to be able to live in peace and security in their own homelands.”

Szijjártó added that although the fundamental premise of the agreement is a “good and unavoidable phenomenon,” the document itself was “dangerous, extremist, biased, and an encouragement to migration.”

According to a 2017-18 discussion paper on Australia’s humanitarian programme, the Turnbull government adopted the New York declaration in 2016 to “enhance responsibility sharing and promote regional cooperation in assisting refugees and displaced people.”

“Australia will advocate for a balance of effective humanitarian response, maintaining a focus on the root causes of displacement and political and peacebuilding interventions, and orderly migration and resettlement pathways,” the discussion paper said.

Australia has already played an important role in the Asia-pacific region by working with other southeast Asian countries, such as Indonesia, on people smuggling, human trafficking, irregular migration, and transnational crimes. It has also consistently ranked among the top three permanent resettlement countries, along with Canada and the United States.