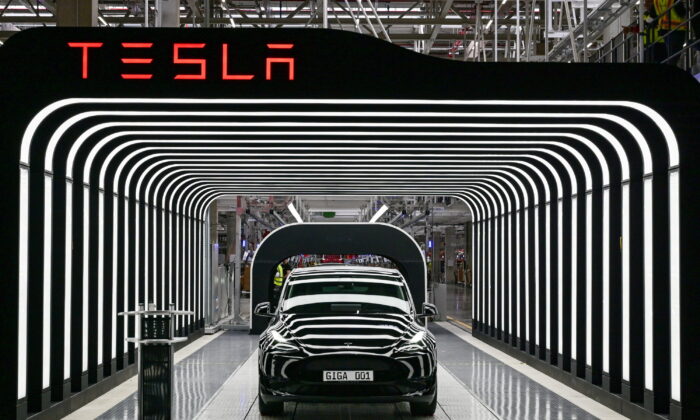 Model Y cars during the opening ceremony of the new Tesla Gigafactory for electric cars in Gruenheide, Germany, on March 22, 2022. (Patrick Pleul/Pool via Reuters)
Australia

Australia Will Need $100 Billion a Year and 1 Million Workers to Reach Net-Zero: Modelling

A university partnership estimates the Australian government will need to invest over A$100 billion (US$68 billion) a year to successfully reach net-zero, with costs to substantially increase year-on-year until the slated target of 2050.

The group also estimated that governments would need to find over one million skilled workers to assist with decarbonisation efforts.

The group revealed in its interim report, released on Aug. 25, five scenarios for the country to reduce emissions and its slated consequences.

One graph revealed that current investments needed to be ramped up substantially, from under $100 billion a year to over $150 billion, to achieve net-zero to facilitate the gradual phasing out of fossil fuel generators in favour of renewable energy sources like mass solar panel and wind turbine farms, as well as new transmission systems.

The study also noted a substantial increase in battery storage and gas-fired power plants to provide firming and backup electricity generation when solar and wind are not available.

However, one factor that could see current cost estimates skyrocket is increasing demand globally for renewable energy manufacturing and equipment as governments all over push to decarbonise their economies. One notable example is the rapid price increase of lithium earlier in 2022, a critical component of rechargeable batteries.

Meanwhile, Australia will also need to find 1 to 1.3 million new workers with the right technical skills across the north of the country. Australia’s current labour force is 13,558,400.

The study is also banking heavily on Australia becoming a major exporter of clean energy to other countries, promising “large export revenues and a million new Australian jobs.”

Robin Batterham, chair of the Net Zero Australia Steering Committee, said the group was hoping to provide an insight into how the country could decarbonise.

“Our findings show there are no two ways about it—to meet net zero by 2050, Australia must transform. Major and long-term investment is required in new renewable generation, electricity transmission, hydrogen supply chains, and more. New skills and training is needed to capitalise on Australia’s clean energy potential,” he said in a statement.

Federal and state governments have already thrown their support behind the rapid decarbonisation of the country’s energy grid. The federal Labor government—along with the left-wing Greens—managed to legislate a new, higher mid-term net zero target for the country, a 43 percent reduction in emissions by 2030.

Labor is also set on overhauling the energy grid so that it is 82 percent powered by renewable energy. Currently, around 64 percent of Australia’s power is provided by coal-fired generation.

The government is also eyeing moves to tackle fuel-efficiency standards to encourage manufacturers to sell more EV cars locally. It has already announced a slate of new tax incentives to reduce the cost of buying an EV car.

These initiatives have been matched by state governments as well, with leaders rolling out a mix of incentives to encourage residents to buy EVs.