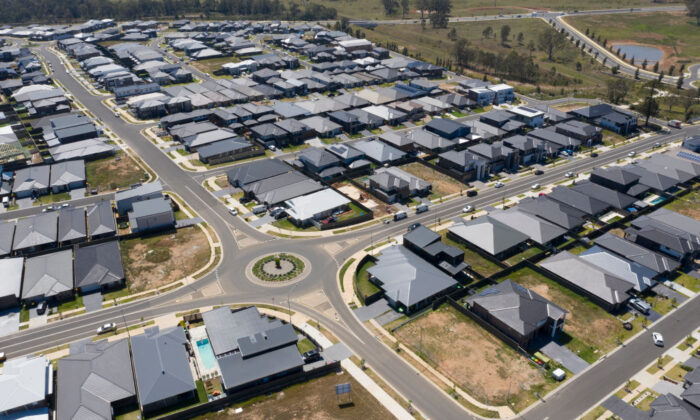 A general view of construction in the new estate of Gregory Hills in Sydney, Australia, on Oct. 23, 2019. (Brook Mitchell/Getty Images)
Australia

Australia May Be Short 160,000 Houses in the Next Decade

Australia may experience a housing shortfall of over 160,000 dwellings in the next decade, according to new modelling by an independent commonwealth housing entity.

“It has been a remarkable past 18 months for Australia’s housing markets, with the largest population shock in a century, unprecedented government stimulus, a widespread flight to the regions, and accelerating house price growth and tightening rental markets impacting housing affordability,” Dal Bon said.

NHFIC modelling suggests that over 1.7 million new households are expected to form across the country in the next decade, with the strongest growth in lone person households.

It also found on the back of low-interest rates and government stimulus; the new housing supply will likely remain strong over the medium term.

Developers reported several issues impacting their ability to deliver new supply, including the lack of zoned land serviced with infrastructure. They also said the land supply in Sydney was likely going to be exhausted in 12 months.

While demand for new land is already rapidly outpacing supply, there were also reports of difficulty in accessing new land supply, particularly around parts of Sydney and Queensland.

The report’s authors warned that if authorities’ activity slowed or impeded the flow of new housing supply, it would put further upward pressure on prices, as it can take over six years to translate housing supply on paper to the market.

“Pulling back on development decisions now will exacerbate affordability problems in future years when population growth is expected to return to more normal levels,” the authors said.

The Property Council of Australia’s CEO Ken Morrison said the report showed how the demand for new houses would outstrip supply as the economy and net overseas migration recovers.

“The projections in this report are concerning and mirror the same warnings the Property Council of Australia has been making for some time,” he said. “The report clearly shows that between 2025 to 2032, Australia will find itself 163,400 homes short of expected demand.”

Morrison said at a time when housing affordability was at the forefront for many households, the last thing they needed was having a supply constraint, further pushing prices.