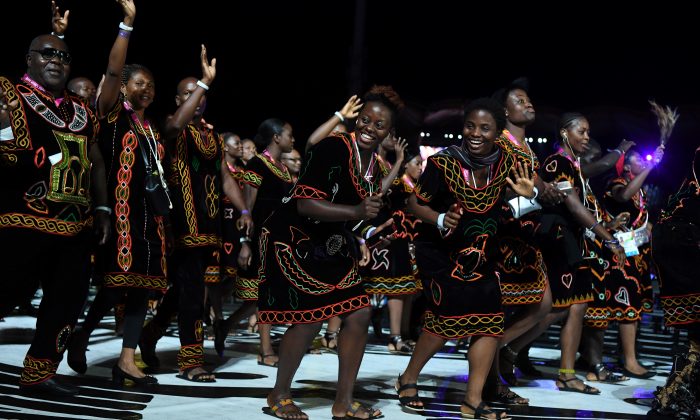 Members of the Cameroon delegation take part in the opening ceremony of the 2018 Gold Coast Commonwealth Games at the Carrara Stadium on the Gold Coast on April 4, 2018. (WILLIAM WEST/AFP/Getty Images)
Australia

Australia’s Minister for Home Affairs Peter Dutton said on Tuesday that a group of African athletes who went missing during the Commonwealth Games must give themselves up or face being deported.

Eight athletes from Cameroon, two from Uganda and a Rwandan para-powerlifting coach went missing from the April 4-15 Games at the Gold Coast, local media have reported.

The athletes will be in Australia illegally from midnight on Tuesday when their visas expire, unless they have taken legal steps to stay.

“If they breach the conditions, they’re subject to enforcement action,” Dutton told reporters on Tuesday.

“Like anyone else, they’re expected to operate within the law, and enforcement action will take place to identify those people and to deport them if they don’t self-declare.”

Some of the athletes had contacted a refugee advice centre in Sydney, the Daily Telegraph newspaper reported.

“Some have been to us for advice,” Ben Lumsdaine, a solicitor at the Refugee Advice and Casework Service, told the paper on Tuesday.

The eight Cameroon athletes comprised one-third of its 24-athlete delegation to the Gold Coast Games.