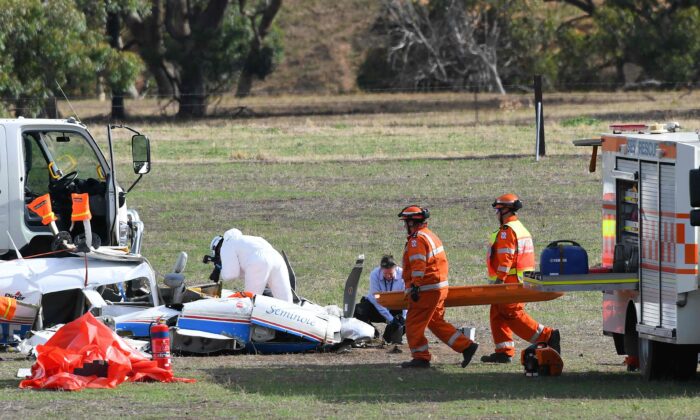 Emergency service personnel attend to the wreckage of a light aircraft on a property at Avenel in Victoria, Australia, on Feb. 19, 2020. (AAP Image/James Ross)
Australia

The ages and suburbs of three men and a woman killed when their two light planes crashed mid-air in regional Victoria have been released.

The two training flights crashed mid-air near Mangalore Airport at about 11.30 a.m. on Wednesday.

Emergency services found the planes a few kilometers (few miles) from each other, and the bodies of the three men and woman in the wreckage.

A Melbourne West woman, 27, and a 79-year-old man from Maiden Gully, in Bendigo, were killed after leaving Mangalore Airport, police said on Thursday.

A Cheltenham man, 30, and a Seaford man, 47, who left from Tyabb airport also died.

The Israeli Foreign Ministry said in a statement to local media that among the dead was an Israeli national, who’s been named by The Jerusalem Post as Ido Segev.

“We are working with the family during this difficult time, and we are helping them with everything related to bringing the deceased back to Israel for burial,” the ministry said.

“Our beloved Ido Segev is no longer with us. He will be remembered by all of us, worldwide,” Adi Kochav posted on social media.

Segev has had connections with the Peninsula Aero Club for years and in December 2016 it posted a photo on social media congratulating him on completing formation endorsement.

It is understood he and another man were on a privately-owned Beechcraft Travel Air D95A operated by the Peninsula Aero Club at Tyabb.

The Civil Aviation Safety Authority said the other plane was a Piper Seminole twin-engine registered to Moorabbin Aviation Services, also on a training flight.

Victorian Premier Daniel Andrews told reporters on Thursday it was a “very, very, very sad” incident and authorities would find the exact cause of the crash.

“We have not seen an incident like this for a long time and these are very serious matters and they will be investigated thoroughly,” Mr Andrews said.

“If there’s any learnings, any changes that need to be made then of course – not just the state government, this is a shared responsibility with the national government – I’m sure people won’t hesitate to act.”

It’s believed one of the planes had taken off from the Mangalore Airport shortly before the crash.

CASA and the Australian Transport Safety Bureau are investigating.

ATSB investigators from Melbourne, Canberra, and Brisbane are going to the site to look at the wreckage and surrounding area.

“The investigators that are deploying to the accident site have experience in human factors, aircraft operations, and maintenance,” ATSB Transport Safety executive director Nat Nagy said.