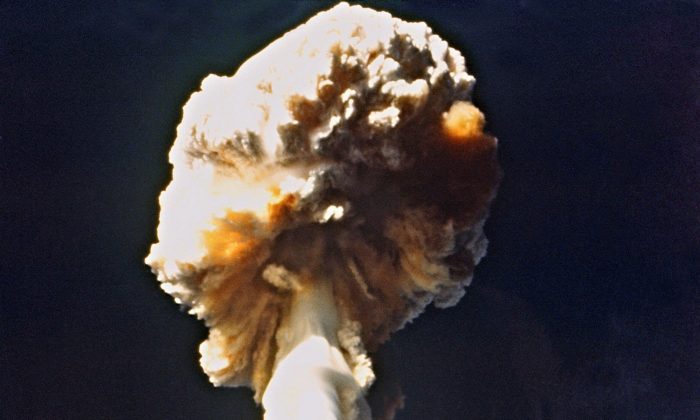 Mururoa, FRENCH POLYNESIA: (Files) This picture taken in 1970 shows a French nuclear test at Mururoa, French Polynesia. Researchers have established a link between France's nuclear tests over the Pacific ocean in the late 1960s and the high incidence of thyroid cancer in Polynesia. France carried out some 40 atmospheric atomic tests in Polynesia from 1966 to 1974. After that its tests were carried out underground. AFP PHOTO (Photo credit should read -/AFP/Getty Images)
Australia

Australia, US Need to Prepare for Possible Nuclear Attack: Report

The Australian government should prepare for the prospect of a nuclear attack from Russia or China a new report says.

The report, called “The Geopolitical Implications of Russia’s Invasion of Ukraine” says northern Australia is at greater risk now due to the collapse of the European strategic order, which he says could escalate into a “wider major war in Europe” involving China.

“The risk of nuclear war is now higher than at any time since the Cold War,” said Prof. Paul Dibb of the Australian Strategic Policy Institute. “At the height of that ideological stand-off, there were much more rigorous arms control agreements between the U.S. and the USSR, as well as a web of other formal and informal modes of communication and signalling, which don’t exist in the same way now as a deterrent to the threat of the use of nuclear weapons.”

“Russian authorities have made it clear that Pine Gap is a priority target. We need to understand what the implications would be for Alice Springs, which is a town of 32,000 people only 18 kilometres from the base,” he wrote.

Pine Gap is a joint military facility in the Northern Territory. It is a critical communication hub for Western allies and is vital to the United States and the United Kingdom.

Dibb called on the federal government to begin serious discussions with the U.S. on how democratic allies could deter a nuclear attack.

“We need to plan on the basis that Pine Gap continues to be a nuclear target, and not only for Russia. If China attacks Taiwan, Pine Gap is likely to be heavily involved. We need to remember that Pine Gap is a fundamentally important element in U.S. war fighting and deterrence of conflict.”

Dibb also called for the federal government to become more involved in NATO as “Europe and Australia now basically agree about China’s attempts at global dominance.”

This comes after NATO declared in April it would engage the Asia-Pacific region to counteract Beijing’s growing influence and economic coercion.

Read More
NATO to Engage in Asia-Pacific to Counter China

Following a meeting of NATO foreign affairs ministers on April 7, the pact’s Secretary-General Jens Stoltenberg said the global implications of the Ukrainian conflict pushed the organisation to step up its engagement with Asia-Pacific for the first time.

Dibbs said that the change in stance from NATO was welcome as it “reinforces Australia’s view of our own strategic environment and identifies China as our major strategic challenge, now combined with the threat from the de facto alliance of Russia and China.”

The defence expert also warned that the U.S. could find itself facing a two-front nuclear war and recommended that Australia engage more closely with NATO to share strategic analysis, including defence contingencies, for security in the Indo-Pacific.

“Senior Americans, including the chairman of the Joint Chiefs of Staff, acknowledge that, if push comes to shove, Washington will for the first time face the threat of a two-front contingency of nuclear war,” Dibbs wrote.

“If the China–Russia military partnership continues its upward trend, that will inevitably affect the international security order, including by challenging the system of U.S.-centred alliances in the Asia–Pacific and Europe.”