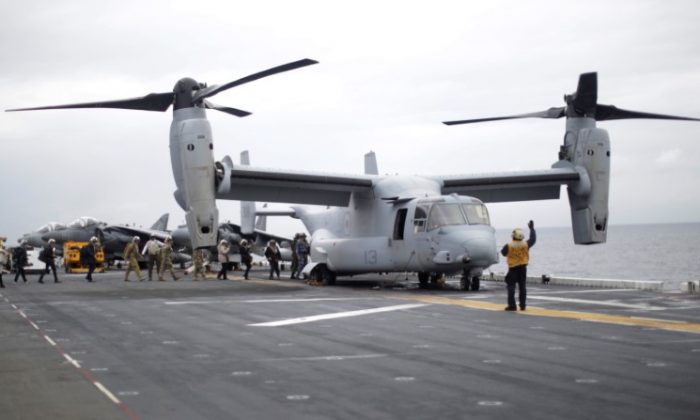 Participants in a ceremony marking the start of Talisman Saber 2017, a biennial joint military exercise between the United States and Australia, board a U.S. Marines MV-22B Osprey Aircraft on the deck of the USS Bonhomme Richard amphibious assault ship off the coast of Sydney, Australia on June 29, 2017. (REUTERS/Jason Reed)
International

Australia and the United States are holding their largest joint military exercise ever—33,000 troops—to be better prepared to deal with issues in the South Pacific.

The exercise also sends a signal, said the U.S. top military commander in the Pacific.

“I’m pleased about that message it sends to our friends, allies, partners and potential adversaries. I think this demonstrates the importance of alliances in general and the value of this alliance in particular,” said Admiral Harry Harris, Commander of U.S. Pacific Command.

The exercises began Thursday, june 29 and will include training in land and air operations but will focus on the sea.

China’s aggression in the South China Sea is an ongoing concern and has raised fears of a confrontation. So too has ISIS taking the city of Marawi in the Philippines hostage.

“What’s going on in Marawi city is a wake up call for the region. I believe that ISIS is trying to gain a foothold in the Indo Asia Pacific and I think it behoves all free nations to take a stand and play a part in defeating ISIS,” said Harris.

The Philippine government says people in the city are being forced to convert to Islam and that rape is common.

The joint exercise will last a month and take place in Australian territorial waters.