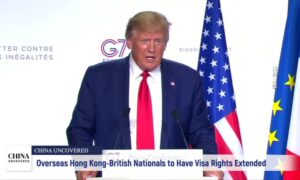 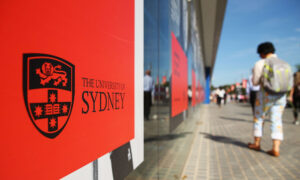 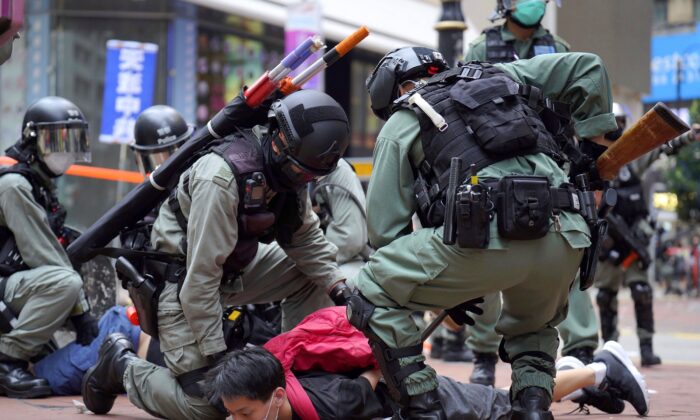 Riot police detain a protester during a demonstration against Beijing's national security legislation in Causeway Bay in Hong Kong on May 24, 2020. (AP Photo/Vincent Yu, File)
Australia

The Chairs of the Foreign Affairs Committees in Australia, Canada, the United Kingdom (UK), and New Zealand have called on the United Nations Secretary-General Antonio Guterres to send a special envoy to Hong Kong to protect the rule of law and human rights.

On June 2, Levitt said on Twitter that the four chairs stand in solidarity with Hong Kongers.

Commenting in the letter that the CCP’s introduction of the National Security Law violates Article 27 of Hong Kong’s Basic Law the four said they had concerns over the Chinese Communist Party’s (CCP) record of abuses when faced with dissent from its rule.

“We believe it is imperative that the international community move rapidly to ensure there is a mechanism for observing and transparent reporting on the impact of the new law.”

Australian Senator David Fawcett said on June 2 that he and his international compatriots felt that it was important to ask the UN Secretary-General to protect the people of Hong Kong’s legal right to freedom under the Sino-British Joint Declaration.

Regarded as a lawfully binding treaty between the UK and China, the Sino-British Joint Declaration was signed on Dec. 19, 1984 and registered with the United Nations by both countries on June 12, 1985.

Protecting the basic rights of Hong Kong citizens, the Joint Declaration established Hong Kong as a special administrative zone within China and asserts that the CCP will not implement a communist system or any communist policies in Hong Kong until 2047.

Speaking to The Epoch Times on June 3, Senator Fawcett said he was conscious of the shared commitment our nation has, along with New Zealand, Canada, and the United Kingdom, to the judicial system and common law.

“For Beijing to impose the Security Law on Hong Kong, without the direct participation of its people, legislature or judiciary, is a breach of the legally Sino-British Joint Declaration,” said Senator Fawcett.

“Article 27 of Hong Kong’s Basic Law which states that Hong Kong residents shall have freedom of speech, of the press and of publication; freedom of association, of assembly, of procession and of demonstration; and the right and freedom to form and join trade unions, and to strike,” Fawcett continued.

Admitting he did not seek prior approval for the letter from Prime Minister Scott Morrison, Fawcett noted that “unlike authoritarian regimes, parliamentary democracies such as ours afford back-bench members and senators the freedom to speak on matters of concern without having to seek prior approval.”

“These are values worth speaking up for both at home and abroad, and uniquely in the context of Hong Kong where citizens of our nations serve as Judges in the Hong Kong Court of Final Appeal,” Fawcett said.

Fawcett expects the United Nations to use the powers available to it to ensure “the right to basic freedoms currently enshrined in Hong Kong law are upheld.”

He said Hong Kong should be a matter of concern for all countries.