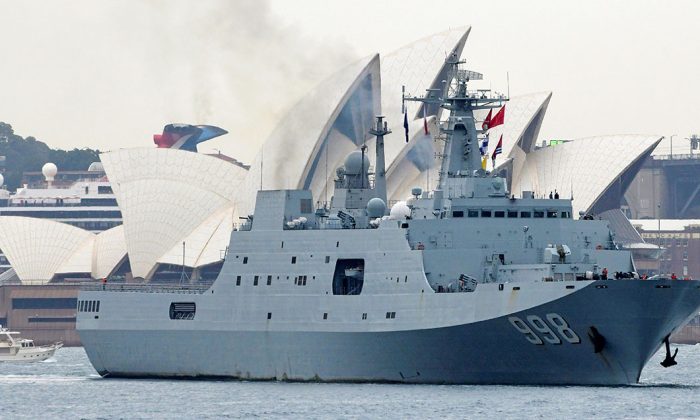 SYDNEY–Australian defense officials said on July 8 they were tracking a Chinese surveillance ship that is expected to position itself just outside of its territorial waters to monitor military exercises between Australia and the United States.

Around 25,000 Australian and U.S. military personnel on board battleships equipped with strike jets will over the next month participate in bi-annual Talisman Sabre war games.

Lieutenant General Greg Bilton, chief of joint operations at the Australian Defence Force, said the Chinese surveillance vessel was probably headed to Australia’s northeast coast to get a first-hand look at the military exercises.

“We’re tracking it. We don’t know yet its destination but we are assuming that it will come down to the east coast of Queensland and we will take appropriate measures,” Bilton told reporters in Brisbane, the state capital of Queensland.

News of the Chinese surveillance ship approaching Australia follows the unannounced arrival of three Chinese vessels in Sydney last month, on the eve of the 30th anniversary of the Tiananmen Square pro-democracy protest.

China’s navy has grown dramatically over the past two decades as Beijing seeks to extend its power of influence.

Relations between the United States and China have soured in recent months amid a trade war and perceived Chinese assertiveness in the Pacific, encapsulated by Beijing’s artificial island building in the disputed South China Sea.

However, on July 12,  2016, an arbitration court in The Hague found the Chinese regime’s claims to be false. In the U.N. tribunal’s ruling, China’s claims to virtually the entirety of the South China Sea were dismissed by the 5-member tribunal as having no historical basis. It was also determined that the multiple artificial islands that have been built by and used as bases by the Chinese military do not constitute territory entitled to zones of economic exclusivity. Rather, they were found to be in violation of the sovereignty of the Philippines.

The Chinese Communist Party (CCP) immediately rejected the tribunal’s decision. A statement from its Foreign Ministry said it viewed the decision as “null and void and has no binding force.” It would “neither accept nor participate in the arbitration unilaterally initiated by the Philippines.” The true impact is uncertain given the tribunal has no power of enforcement, The Associated Press reported on July 12, 2016.

Brunei, Malaysia, the Philippines, Vietnam and Taiwan also have claims on the waterway, through which about $5 trillion in ship-borne trade passes every year.

Australia and China are also competing for influence in the South Pacific, a sparsely populated region that control vast swathes of resource rich oceans.