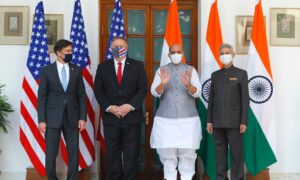 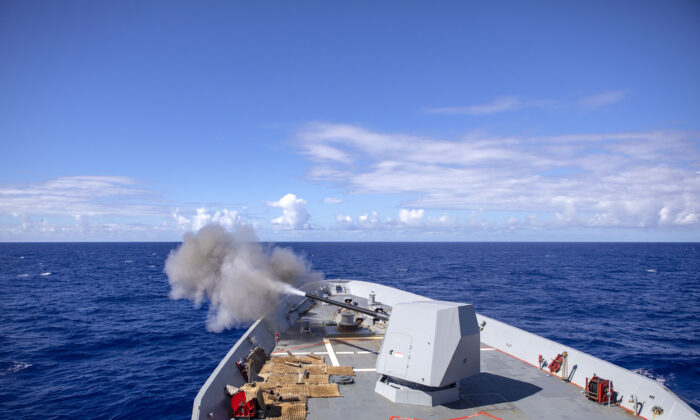 HMAS Hobart fires its 5-inch gun in the southern waters of Hawaii during Exercise RIMPAC 2020 on Aug. 17, 2020. (Australian Department of Defence)
Australia

Australia and Fiji have commenced negotiations for a reciprocal Status of Forces Agreement (SOFA) that will allow for the rapid deployment of each other’s militaries to one another’s jurisdictions, and see the construction of a military facility in Fiji.

The decision was made in recognition of the “growing sophistication of defence engagement” between Fiji and Australia.

Linda Reynolds, Australia’s defence minister, said it made sense for the defence forces of both nations to work closely to strengthen its abilities to work together to “help maintain a resilient and secure region.”

“This year, Australia and Fiji have worked shoulder-to-shoulder in response to significant challenges in our region from COVID-19 to Tropical Cyclone Harold,” Reynolds said. “Fiji’s swift and welcome response in deploying the Bula Force to support Australia during the Black Summer Bushfires will never be forgotten.”

Fiji Defence Minister Inia Seruiratu noted that despite the challenges of 2020, the bilateral relationship had gone from strength to strength.

“Our partnership has strong foundations; we meet as friends and family or ‘vuvale’. Together we can protect our shared interests in the Pacific,” Seruiratu said.

Fiji’s aid during the bushfires demonstrated the importance of being able to “move quickly” to help one another, Seruiratu said.

“A SOFA will facilitate the rapid deployment of our respective personnel to one another’s jurisdictions with the requisite legal protections,” he said.

Australia will also fund the construction of the Maritime Essential Services Centre (MESC) in Fiji with the ministers saying it would increase pacific maritime defence cooperation.

The MESC will incorporate the Republic of Fiji Navy Headquarters, the Fiji Maritime Surveillance and Rescue Coordination Centre, Coastal Radio and Fiji’s Navy Hydrographic Service and will generate jobs for the pacific nation.

“The new Centre will greatly facilitate maritime security coordination within Fiji and throughout the region. Australia is proud to partner with the Fijian Government on this project,” Reynolds said.

As part of the Pacific Maritime Security Program, Australia delivered a brand new Guardian-Class Patrol Boat, the RFNS Savenaca, to Fiji in March which was built by Austal in Australia.

Fijian Prime Minister Josaia Voreqe Bainimarama thanked Australia for its strong support of the Pacific when the country took delivery of the navy vessel. He said that it was vital for Pacific nations, along with Australia and New Zealand, to protect the region from dangers like the devastation of overfishing and pollution.

“Fiji stands ready to put our fleet to work to secure a safer Pacific. But we can’t limit our ambition to our region and lose sight of the larger, global challenges to oceans health and security,” Bainimarama said.