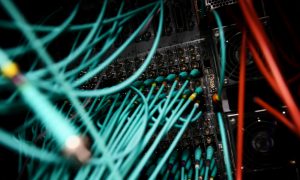 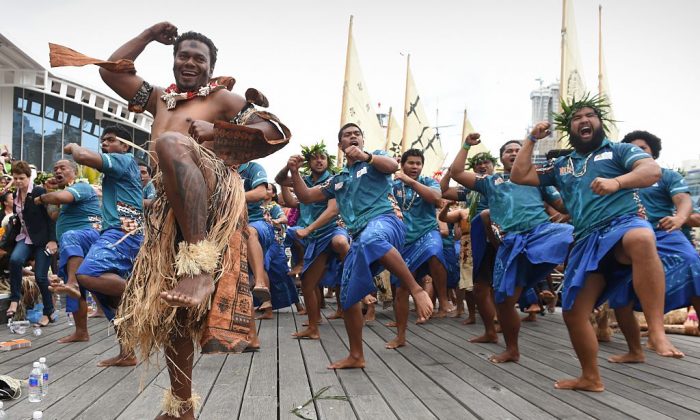 Men from the pacific island nations of Tonga and Fiji perform a traditional Haka after arriving in Sydney, Australia, on Nov. 12, 2014. (Peter Parks/AFP/Getty Images)
Australia

Australia to Spend $300 Million in Pacific to Combat Beijing Money

The Australian government has committed to spending $300 million (US$232 million) on infrastructure projects in the Pacific region as a way to combat Beijing’s predatory lending in the region.

In a report by The Sydney Morning Herald and The Age, it was revealed that the move is part of Australia’s Pacific step-up efforts and includes a raft of loans and grants for upgrading telecommunications, transport, health facilities, and power projects.

Federal Minister for International Development and the Pacific Zed Seselja told the Herald that Australia is looking into a substantial pipeline of investment in the Pacific region.

“Australia is investing in high-quality infrastructure projects with our Pacific island neighbours, using a combination of loans and grant funding,” he said.

The funding is set to come from the Australian Infrastructure Financing Facility for the Pacific (AIFFP). Created in 2018, the AIFFP has a offered $2 billion (US$1.55 billion) worth of loans and grants to the Pacific region.

At present, there are five major projects that have received funding, including the construction of an undersea cable for Palau, a hydro-power system in the Solomon Islands, and a solar farm in Papua New Guinea. There is also work on preliminary studies for an undersea telecommunications cable for Timor-Leste and flood mitigation in Fiji.

The project blitz comes as Australia looks to offer al alternative to Beijing money in the region via the Chinese Communist Party’s Belt and Road Initiative (BRI) and the Asian Infrastructure Investment Bank (AIIB), both of which have provided predatory loans to bankroll infrastructure projects.

According to research from the Lowy Institute, in 2019, China was the region’s third-largest donor. Even more concerning for some experts is that the Beijing-backed AIIB has been the number one donor.

Reuters reported that the AIIB had seen an increase in loans to the Pacific region over the past year as countries seek to find a way out of the economic downturn caused by the global CCP (Chinese Communist Party) virus pandemic.

“China is very willing to lend money to any Pacific island nation. As much as Australia and New Zealand have encouraged the islands to look to them first, it’s been a lot easier getting money out of China,” Fletcher Melvin, president of Cook Islands’ Chamber of Commerce, told the newswire.

Chinese leader Xi Jinping launched the AIIB in 2013 as a way to position Beijing at the centre of global infrastructure investment. It has been marketed as an alternative to the World Bank and the Asian Development Bank, whose largest shareholders are the United States and Japan. A total of 85 member countries have bought a stake in the AIIB, which is primarily bankrolled by the CCP (pdf).

Anna Powles, a senior lecturer at the Centre for Defence and Security Studies at Massey University in Wellington, New Zealand, told Reuters that loans from the AIIB could create debt traps for participating counties, much like the BRI.

“If the AIIB becomes the primary lender to the Pacific and the region’s economic recovery is driven by Chinese lending, then certainly there will be cause for significant concern that economic dependence could be exploited,” Powles said.

Beijing has increasingly used debt-trap diplomacy via Belt and Road loans to gain a toehold around the world. These loans are often compounded by high-interest rates with short repayment times, saddling countries with unplayable loans that enrich the regime in Beijing. When countries can’t pay their debt, Beijing asks them to make significant concessions, which experts and leaders have said creates risk.

Sri Lanka, for example, had to hand over 70 percent control of its strategic Hambantota Port to a Chinese state-owned firm for a 99-year lease after they could not make their loan repayments. Meanwhile, Djibouti has ended up handing over its main port to Chinese control, with the PLA establishing a permanent military base.

This is a concern for Australia as it means that China could place a military establishment in our neighbouring region.

Defense analyst Tom Corben, resident Vasey Fellow at Pacific Forum, noted in The Diplomat that should Chinese-funded infrastructure projects generate a regular military presence for the CCP in the Pacific Islands Region (PIR), it could give Beijing the ability to threaten island nations, including Australia, militarily, and sever critical supply lines with the United States and Japan.

“Historically, the region has not been a leading source of ‘traditional’ military threats, but America and Australia can no longer afford to overlook the PIR as a locus of Chinese security activity,” Corben wrote.

Indeed, a Pacific base could provide the CCP with a foothold for operations “to coerce Australia” and outflank the United States, Corban says, which would see a regional security crisis.