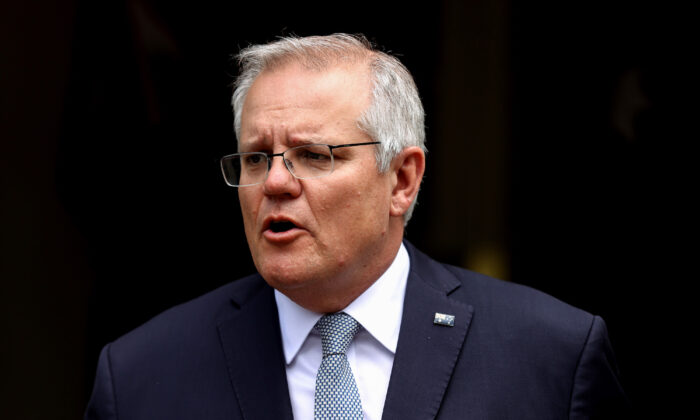 Australia and Japan are set to sign a “historic treaty” at a virtual leaders’ summit on Jan. 6 to strengthen defense and security cooperation, a move seen as a response to China’s growing assertiveness in the Indo–Pacific region.

Australian Prime Minister Scott Morrison said in a statement that the signing of a reciprocal access agreement with Japanese counterpart Fumio Kishida would “underpin greater and more complex practical engagement” between the two countries’ defense forces.

“This treaty will be a statement of our two nations’ commitment to work together in meeting the shared strategic security challenges we face and to contribute to a secure and stable Indo-Pacific,” Morrison said.

“It will, for the first time, provide a clear framework for enhanced interoperability and cooperation between our two forces.”

The announcement came after Kishida canceled his trip to the United States and Australia because of a surge in the domestic and overseas spread of the CCP (Chinese Communist Party) virus, commonly known as the novel coronavirus.

China wasn’t mentioned in Morrison’s statement, but he noted that the treaty would contribute to an “expanding agenda” for the Quad, an informal strategic security dialogue between the United States, Australia, India, and Japan that promotes a free Indo–Pacific.

The agreement also will allow Australia and Japan to share their technology-led approach to reduce carbon emissions, he added.

Australia’s treaty with Japan follows the formation of AUKUS in September, a new defense agreement linking the United States, Britain, and Australia, under which Australia will acquire a nuclear-powered fleet for the first time.

Japanese Foreign Minister Yoshimasa Hayashi and his Australian counterpart, Marise Payne, agreed last month to boost the countries’ “special strategic partnership” to “a higher level” to achieve the “Free and Open Indo–Pacific” goal, according to the Japanese foreign affairs ministry.

The ministers, who met at the sidelines of a G-7 Foreign and Development Ministers’ Meeting, emphasized that Japan and Australia would continue to assist in building quality infrastructure in the Indo–Pacific region, including by utilizing the framework of Japan, Australia, and the United States.

Australia and the United States also have reaffirmed their efforts to promote peace and prosperity in the Indo–Pacific and aim to deepen their alliance amid concerns over China’s military and economic ambitions in the region.