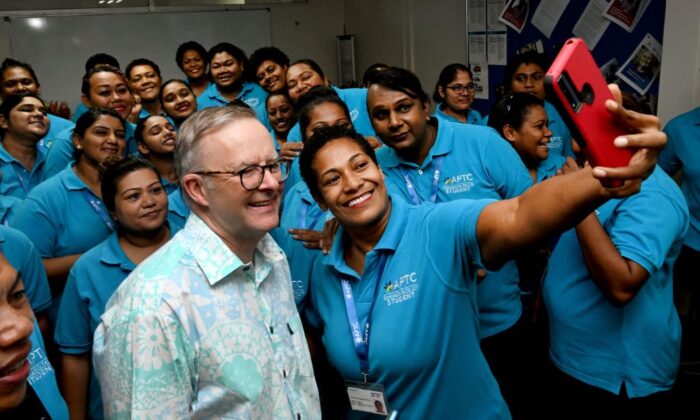 Australian Prime Minister Anthony Albanese (L) poses for a selfie with staff and students during a tour of the Australia Pacific Training Coalition centre (APTC) after attending the Pacific Islands Forum (PIF), in Suva on July 15, 2022. (William West/AFP via Getty Images)
Australia

Australia to Shore up Pacific Ties With Expanded Migration Program

The Australian government will expand its labour program to bring more Pacific Islander workers to the country in a bid to shore up relations with the region.

Prime Minister Anthony Albanese said the Pacific Australia Labour Mobility program, which already assists around 25,000 workers, will be expanded to include the services sector, notably aged care, tourism, and hospitality.

“Traditionally, it has been in areas such as agriculture, and in meatworks, and other blue-collar industries that have tended to mean that men from the Pacific have participated in the scheme,” he told reporters on July 15.

“This is good for our Pacific Island neighbours, because what it enables is more women to participate in the scheme. But it’s also good for Australia, because these are areas in which there are massive skill shortages.”

The prime minister reiterated his government’s commitment to provide 215 minutes of care per day for every aged care resident.

Further, he said the average Pacific worker in Australia remitted around $6,000 a year to their country of origin.

“So, it’s a way of boosting the economy here, whilst making a real difference back in Australia.”

Shoring Up Ties As Beijing Ramps Up Pacific Push

Albanese has been in Fiji attending the Pacific Islands Forum.

The prime minister has promised to bring “positive energy” to the event and touted his government’s openness to “listening” to the Pacific’s concerns on climate change.

“I’ve spoken about treating countries with respect. What that means is not just talking but listening,” he told reporters on July 13. “We have, as human beings, two ears and one mouth for a reason—because we should use the ears twice as much as we use our mouth. If you do that, you’ll learn from each other.”

Albanese also declared on July 14 that he was “very confident” that Solomon Islands Prime Minister Manasseh Sogavare would keep his word that a recently signed security deal with Beijing would not result in militarisation of the region.

In May, details of the contentious deal between Sogavare and Beijing emerged, which could allow the Chinese Communist Party to station troops, weapons, and naval ships in the Pacific country.

“I sat with him at dinner last night. One of the things we need to do is build personal relations between Australia and our friends in the Pacific,” Albanese told Channel Nine. “We need to be prepared to listen to what they have to say, be prepared to assist in their development. But also be prepared to advocate, as my government is, action on issues of concern to them.”