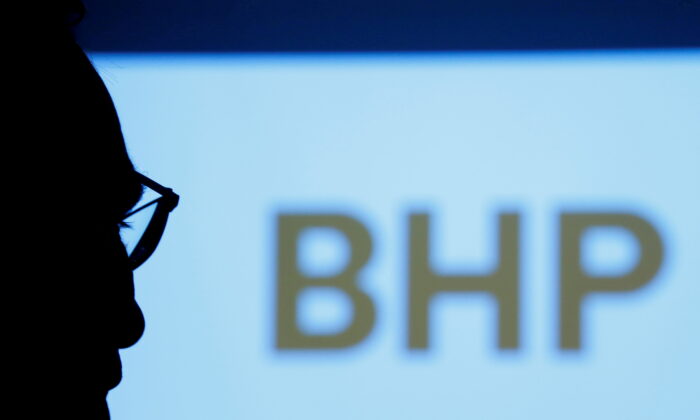 BHP's logo is projected on a screen during a round-table meeting with journalists in Tokyo, Japan, on June 5, 2017. (Kim Kyung-Hoon/Reuters)
Australia

HONG KONG—Australia is set for its best year ever in Mergers and Acquisitions (M&A) activity despite extended pandemic-induced lockdowns in its most populous states as cash-rich corporates and funds scoop up assets, with bankers seeing no sign of the momentum slowing.

The volumes were driven by a number of mega deals targeting listed infrastructure and resources firms.

Those included BHP Group’s proposed $86 billion unification of its dual-listed company structure and the $14 billion sale of its petroleum business to Woodside Petroleum.

Infrastructure assets in Australia were particularly attractive to superannuation and pension funds, which are eager to deploy their low-cost capital for stable, long-term gains, bankers said.

“Investors into semi-regulated infrastructure assets have high confidence in the future cash flows of the assets they are buying,” said Nick Sims, Goldman Sachs’ Australia co-head of investment banking.

“Rates are going to stay low for the foreseeable future, if they do increase it will be at a slow pace, so infrastructure investors are investing with a long-term time frame,” Sims added.

The deals were struck while many states in the country have been in and out of strict lockdowns since the onset of COVID-19.

“The lockdowns and the uncertainty around the demand side has really led corporate leaders to take a strategic reset of sorts,” said Alex Cartel, Citigroup’s Australia head of investment banking.

“You had a number of corporates, private equity funds, sovereign wealth funds with access to capital markets, that had strategic ambitions that have said let’s get going.”

Deals targeting Australian companies, at $200 billion, made up 20 percent of the region’s overall value, compared to just 4 percent in the same period last year, according to Refinitiv data.

“There are a number of factors all coming together, including some pent-up demand from last year. Also noteworthy is the level of cross-border inbound activity. I’m not seeing signs of activity slowing down.”

U.S. payments firm Square Inc. made the year’s biggest foray into Australia in August with the $29 billion acquisition of local fintech firm Afterpay.

Samson Lo, head of Asia M&A at UBS, said more assets owned by private equity firms were set to be put on sale, while mergers between Special-Purpose Acquisition Companies (SPACs) and their targets would likely be another volume driver.