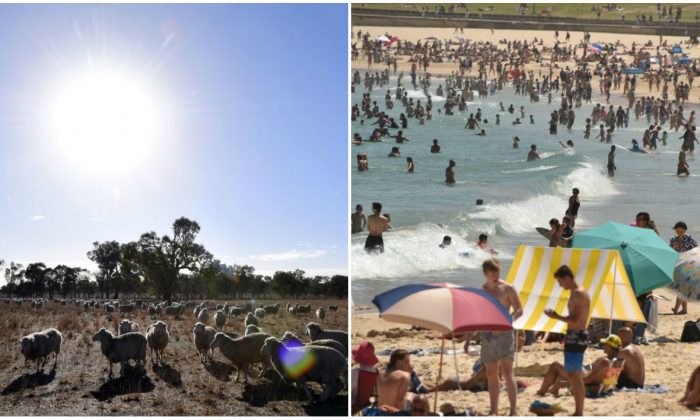 (L) Sheep grazing on a dry paddock in the drought-hit area of Duri in New South Wales on Aug. 7, 2018. (R) Sunbathers are seen on Bondi Beach as temperatures soar in Sydney on December 28, 2018. (Saeed Khan/Peter Parks/AFP/Getty Images)
Australia

Australia is experiencing one of its hottest end-of-year periods ever, as fire bans are effected and health warnings are issued across the country, while big crowds find different ways to cool off—be it on the beach, the local pool or at an ice rink.

Forecasters said the heat is headed to southeast Australia where the big cities of Sydney, Melbourne, and Adelaide would endure monthly average temperatures some 10 to 14 degrees Celsius higher than usual.

That means temperatures are expected to pass 40 degrees Celsius (104 degrees Farenheit) in many parts of the country.

In Marble Bar, a town and rock formation in the north-western region of Western Australia, temperatures reached 49.1 degrees Celcius (120.38 Fahrenheit) on Dec. 27—the highest temperature the town has ever experienced in December, beating its own previous record by 0.1 of a degree, according to Ten Daily News. The town only has a population of 174 people.

#Heatwave conditions are being experienced across large parts of the country. Temperatures peaked at 49.1°C at Marble Bar (WA). Heatwave conditions occur when both maximum and minimum temperatures remain well above average for the time of year https://t.co/qCG9wWrJ8U pic.twitter.com/rRC7mGZn8h

Tom Saunders, Sky News’ Chief Meteorologist, told news.com.au: “We’re in the middle of a heatwave at the moment in much of Australia.”

He added that “there’s no sign of a cool change before New Year’s Eve.”

“New Year’s Day will be day nine of that heatwave,” he said. “We won’t see a cool change until the middle of next week—it could be after that or another full week.”

The Australian Bureau of Meteorology says that from Dec. 30, there will be “widespread severe heatwave conditions stretching from central parts of WA, across central Australia and then patchy as it spreads down over southeastern NSW.”

“Low-intensity conditions spread out around this and include far northern parts of VIC, southwestern parts of QLD, central NT and southern interior WA.”

“This is all because of a high-pressure system coming off the Tasman Sea that is slow moving and has set up a pattern over several days,” said Bureau of Meteorology forecaster Nick Neynens, the Sydney Morning Herald reported.

“It’s a very stable situation with not a lot changing, meaning everywhere is pretty much going to be hot and we don’t see a strong change coming yet.”

‘The Fire Risk is Very Real’

Health authorities have issued warnings for pregnant women, babies, and people aged over 65.

“It’s important to keep up water intake, stay cool and avoid strenuous physical activity in the heat of the day because heat places a lot of strain on the body and cause dehydration, heat exhaustion and heat stroke,” he said, Nine News reported.

Authorities have also issued warnings to people with lung conditions since the heat can erode air quality.

“While we haven’t got total fire bans in place, this hot air mass is having a baking effect on the landscape that is rapidly drying out and curing the vegetation, which makes the vegetation susceptible to rapid fire spread,” he said, according to news.com.au.

“We don’t need to wait for severe, extreme or catastrophic fire conditions to have a fire risk. The fire risk is very real and that’s why it is very high in such large geographic areas.”

He added that the hot air currently over South Australia, which had prompted fire bans across the state, will move east and reach regional NSW over the coming days.