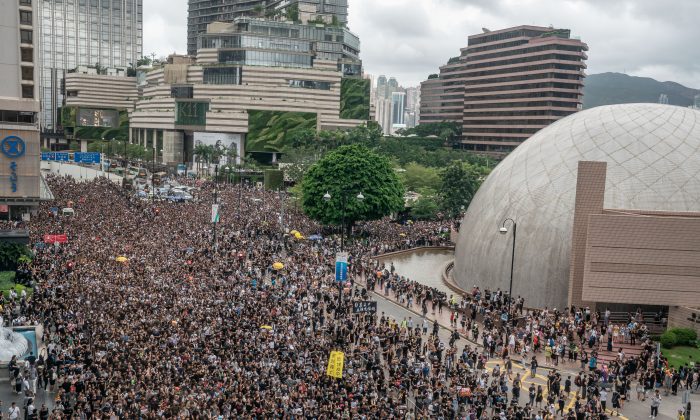 Over 230,000 people rallied in Kowloon, Hong Kong on July 7, 2019 as pro-democracy demonstrators have continued on the streets of Hong Kong for the past month, calling for the complete withdrawal of a controversial extradition bill. (Anthony Kwan/Getty Images)
China Human Rights

Instead, standing up firmly for human rights and the rule of law will show that Australia is serious about its foreign policy values, Henderson said, echoing Prime Minister Scott Morrison’s remarks to the Asia Briefing in November last year.

Henderson said that Australia can do more to support Hong Kong in following the lead of the European Union, Germany, the United Kingdom, Canada, and the United States, who have publicly called on Hong Kong to have it’s proposed extradition bill scrutinised to ensure that the rights and freedoms of the Hong Kong people are protected.

No amount of “explaining” was ever going to suffice, as the originating ordinances had fundamental problems, incl lack of human rights protections.

It would help if officials, Ronnie Tong, Regina Ip & others finally admitted this. Unfortunately, it seems unlikely at the moment. https://t.co/UOpx6KKAvy

“Foreign governments need to be aware that advocating for the protection and promotion of human rights doesn’t involve interfering in internal affairs—as a matter of international law,” Henderson said.  “Human rights are universal, indivisible, interdependent.”

On Aug. 5, former Prime Minister John Howard spoke publicly at a mining conference about the Hong Kong protests, describing the hundreds of thousands of peaceful demonstrators as “inspirational,” according to The Australian.

“When you think of the total population of Hong Kong and the number of people taking part in those demonstrations, it is a remarkable reminder of the resilience of the human spirit.”

Howard said that the Chinese regime is more authoritarian compared to 10 years ago, adding that “what we are seeing in Hong Kong perhaps represents a glimpse of the future for Chinese society.”

Despite no longer holding any responsibilities of office, commentators have described Howard’s speech as an important intervention. This is in stark contrast to Foreign Minister Marise Payne who has been relatively cautious in her response, according to Henderson.

In a radio interview with ABC radio on Aug. 6, Payne acknowledged Australia’s interests in Hong Kong, and said she hoped both sides are “working with restraint and are trying to resolve tensions peacefully.”

Her response was similar to one she gave on June 12 that said: “Australia supports the right of people to protest peacefully and to exercise their freedom of speech, and we urge all sides to show restraint and avoid violence.”

DFAT did not respond to questions posed by The Epoch Times related to Hong Kong’s proposed extradition bill.

Henderson added: “What is well known is that Beijing certainly intervenes regularly in the political environment in Hong Kong. And for foreign government officials who are concerned about the safety of their nationals under this new extradition proposal … it would allow anybody who set foot in Hong Kong to potentially be extradited to the mainland.

“The idea that the extradition measures would be allowing people to be sent from Hong Kong to the mainland is extremely problematic, let alone that Beijing was now openly and publicly advocating for them,” he said.

What Can Be Expected in the Short to Mid-Term

Despite no show of willingness from the Hong Kong government to resolve the situation, protestors remain highly motivated, Henderson said.

“The administration is in part acting with the hope that the protest movement will fade away.

“Unfortunately, I do see further escalation in the short term. I suspect what we are likely to see in the coming months is escalating violence on the streets.

“I think we’re going to see an escalation in protests and likely to see genuine riots, I think we’re starting to see further restrictions on assembly.”

In the mid-term, new laws could be introduced by the government to clamp down on protest activities.

“I do fear about the continuing rising rhetoric of the issues around foreign forces, and what [impact] that might have in terms of civil society development in Hong Kong.

“I don’t see though, at this stage, that PLA is likely to intervene as I think that would be catastrophic to the situation in Hong Kong. And I believe that Beijing knows that.”

What the Australian Government Can Do

Despite Australia’s economic interests in Hong Kong, Henderson said that standing up for Australia’s foreign values—such as respect for human rights and upholding the rule of law—needs to be prioritised.

He suggested that communications from the government need to state clearly that they are not for the purpose of interfering with internal affairs but to uphold international law.

Henderson also suggested that the anti-extradition protester’s demand for an independent inquiry into police violence should be publicly supported by the Australian government.

In reference to any PLA deployment by Beijing, Henderson said: “Australia should privately inform Beijing that any action or deployment of PLA would substantially impact Australia-China relations.”

In addition, he said Australia needs to ensure that no crowd control equipment is exported to Hong Kong.

“Firstly, a bipartisan motion on Hong Kong, which should note concerns with the overall deterioration of human rights, and rule of law environment, again, clearly stating such concerns are not interference.

“Secondly, I think the parliamentary joint committee on human rights should hold an inquiry into the human rights situation in Hong Kong.

Thirdly, Henderson suggested that the Australia-Hong Kong Free Trade Agreement (A-HKFTA), which was signed on March 26, should be carefully scrutinised to ensure sufficient human rights protections are in place before it progresses.

Henderson warned that Australia’s interests will not be protected by ignoring the events taking place in Hong Kong.

“Silence on Hong Kong will not deliver any additional economic agreements, and Australia should not accept any threats from Beijing that will harm such economic interests.

“We should not be held hostage to our foreign policy values.”